NVIDIA reveals the Titan V, the world’s most powerful GPU with an equally epic price

NVIDIA reveals the Titan V, the world’s most powerful GPU with an equally epic price 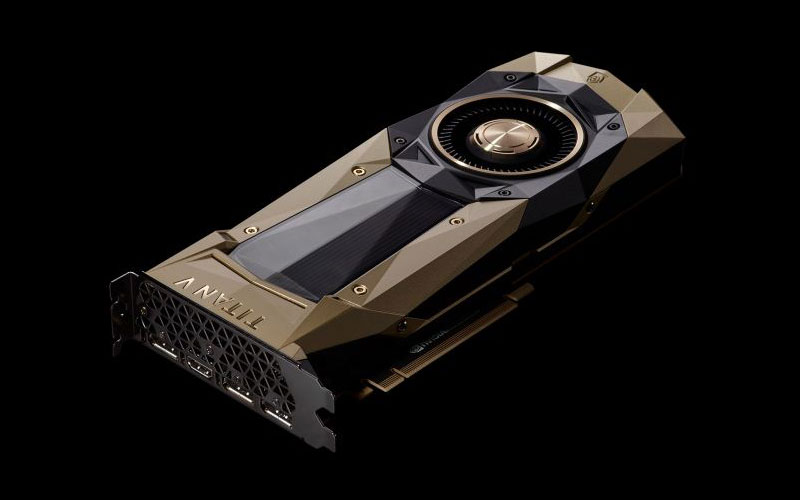 NVIDIA is making the title of the world’s fastest graphics card quite an ephemeral one. The Titan Xp isn’t even a year old, but the company is back with yet another GPU king.

CEO Jen-Hsun Huang announced the Titan V on stage today at NIPS 2017, a brand new card powered by the mammoth 815mm2 GV100 GPU. In fact, the card is now available to the public on NVIDIA’s online store.

This is technically the first consumer-grade GPU to be based on the Volta architecture, unlike the Tesla V100 accelerator that is aimed at data scientists, researchers, and engineers working on things like artificial intelligence.

However, it’s probably be more accurate to characterize the card as a prosumer one. The staggering US$2,999 price tag means that it’s out of the reach of most gamers, and NVIDIA is still angling the card toward researchers who will be able to better take advantage of its computational processing prowess.

The Titan V boasts a golden shroud that matches its stratospheric pricing really well, and it’s a nice break with the black and silver of NVIDIA’s previous designs.

It uses a vapor chamber cooler with a copper heatsink and 16 power phases, and features the same 250W TDP as the Titan Xp.

Here’s an overview of its specifications and how it compares with NVIDIA’s other top-end models:

The Titan V obviously shares a lot in common with the Tesla V100, and both GPUs are equipped with 640 tensor cores for much improved compute performance.

NVIDIA is claiming up to 110 TFLOPS of deep learning horsepower on the Titan V, which is why it's positioning this card primarily as a compute accelerator. That said, I know better than to say that those who have to cash to burn won't just get this card for gaming.

Other notable upgrades include the new 12nm FinFET process and HBM2, both firsts for a consumer/prosumer-grade card from NVIDIA.

The burning question now is when we might see more affordable gaming-oriented GPUs based on Volta. Rumors point toward an announcement at GTC 2018 in March, but we can really only speculate for now.

Join HWZ's Telegram channel here and catch all the latest tech news!
Our articles may contain affiliate links. If you buy through these links, we may earn a small commission.
Previous Story
Lazada is now an Apple Authorized Reseller in 6 Southeast Asian countries
Next Story
AMD quietly downgrades some Radeon RX 560s, then apologizes