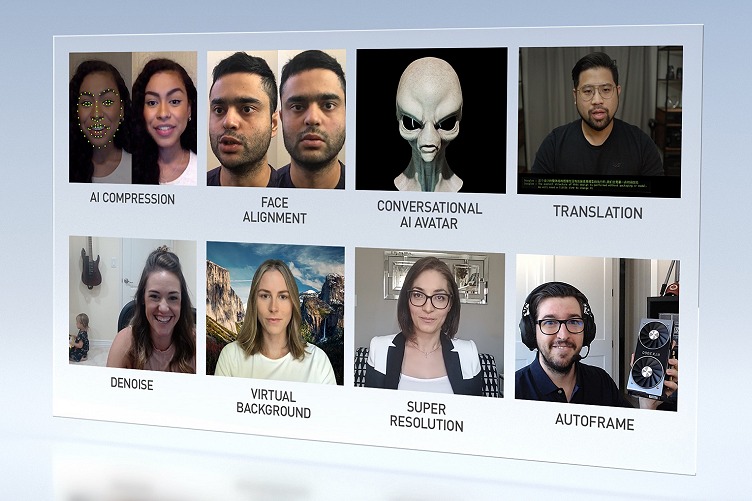 NVIDIA Maxine is a cloud-native streaming video AI platform that allows service providers to bring new AI-powered capabilities to the more than 30 million web meetings estimated to take place every day. Video conference service providers running the platform on NVIDIA GPUs in the cloud can offer users new AI effects -- including face alignment (where you appear to be facing the camera),  gaze correction (to simulate eye contact even if your camera isn't aligned to the screen), super-resolution, noise cancellation, face relighting and more. Other possibilities include animated avatars with realistic animation driven by your voice and emotional tone in real-time, as well as auto framing that allows the video feed to follow the speaker even if one shifts away from the screen.

Data is processed in the cloud rather than on local system, so all the new added functions can be enjoyed without any new requirements on the client systems.

But beyond new features, first and foremost, NVIDIA Maxine promises massive bandwidth savings by using AI to analyze key facial points of each person on the call, and re-animates the face in the video to the viewer on the other end. This allows video conferencing to stream far less data across the internet as opposed to streaming the entire screen of pixels for every frame. In conjunction with a new video compression algorithm run on NVIDIA GPUs, the bandwidth consumption is cut to one-tenth of the usual H.264 streaming video compression standard. This ultimately means a drastic reduction in costs for service providers and smoother video conferencing experience for those on the receiving end.

The Maxine platform integrates technology from several NVIDIA AI SDKs and APIs. In addition to NVIDIA Jarvis, the Maxine platform also leverages the NVIDIA DeepStream high-throughput audio and video streaming SDK and the NVIDIA TensorRT SDK for high-performance deep learning inference. The AI audio, video and natural language capabilities of the Maxine platform were developed through hundreds of thousands of training hours on NVIDIA DGX systems.

Also on the topic of collaboration, for 3D design content collaborators and digital artists, NVIDIA's Omniverse that we reported last year is now available in open beta.

Join HWZ's Telegram channel here and catch all the latest tech news!
Our articles may contain affiliate links. If you buy through these links, we may earn a small commission.
Previous Story
Zeiss' first full-frame camera is now available to pre-order for US$6,000
Next Story
NVIDIA's new BlueField DPUs will accelerate data center infrastructure operations