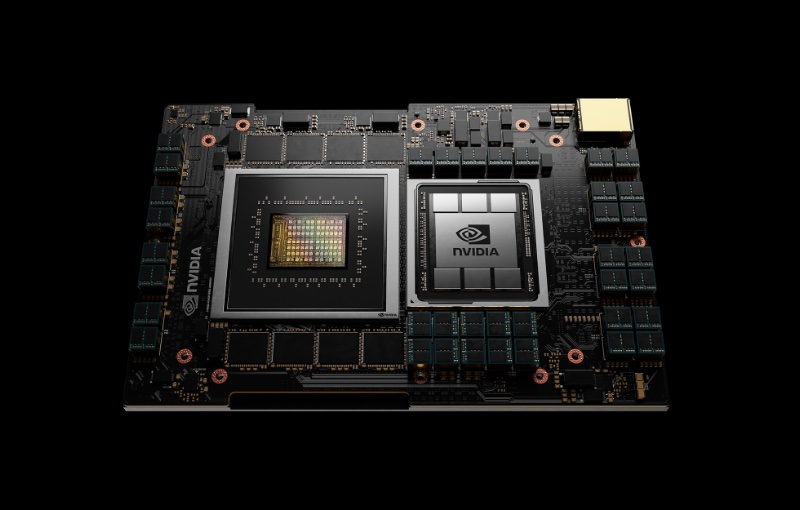 At NVIDIA GTC 2021, the company has taken the wrapping off their first data centre CPU, an ARM-based processor that they say will deliver 10x the performance of today’s fastest servers on the most complex AI and high-performance computing workloads, called Grace.

NVIDIA itself is no newbie to making its own processors. We’ve covered their Tegra K1 and Denver processors before. But these are the first launched by NVIDIA since it announced its intention to acquire ARM last year for US$40 billion.

Jensen Huang, founder and CEO of NVIDIA, said at the time:

AI is the most powerful technology force of our time and has launched a new wave of computing. In the years ahead, trillions of computers running AI will create a new internet-of-things that is thousands of times larger than today’s internet-of-people. Our combination will create a company fabulously positioned for the age of AI.

And Grace seems to deliver on this. Jensen Huang was certainly excited with the company’s one architecture vision for data centres with NVIDIA offering three chips to the market – the CPU, GPU, and DPU. 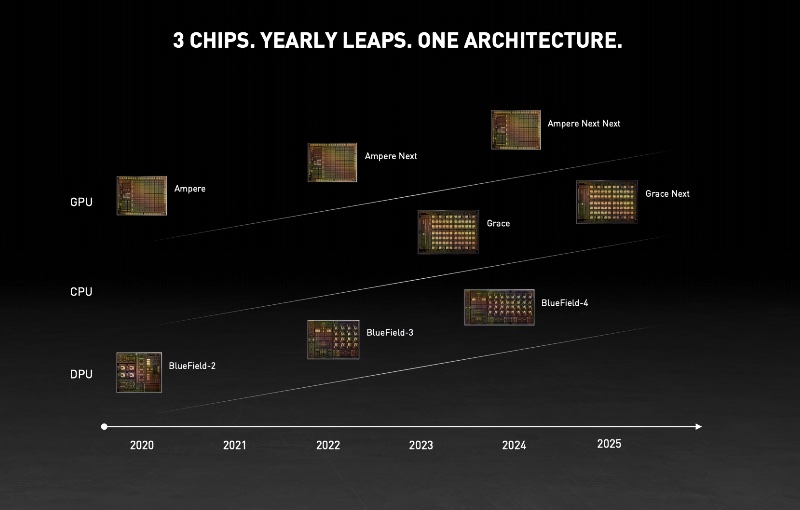 ARM has been on a roll of late with Apple’s M1 chips consistently impressing and outperforming Intel. And this NVIDIA announcement can’t be good for Intel who saw their share price take a hit on the Grace announcement.

Named for Grace Hopper, a U.S. computer-programming pioneer, NVIDIA says that Grace CPUs will serve a niche segment of computing and address the computing requirements for the world’s most advanced applications — including natural language processing, recommender systems and AI supercomputing.

Expected to ship in 2023, we are rather light on details now.

What we do know is that Grace is based on some upcoming ARM Neoverse core with more NVLinks for CPU-GPU communication to deliver a record 900GB/s interconnect between the CPU and GPU. 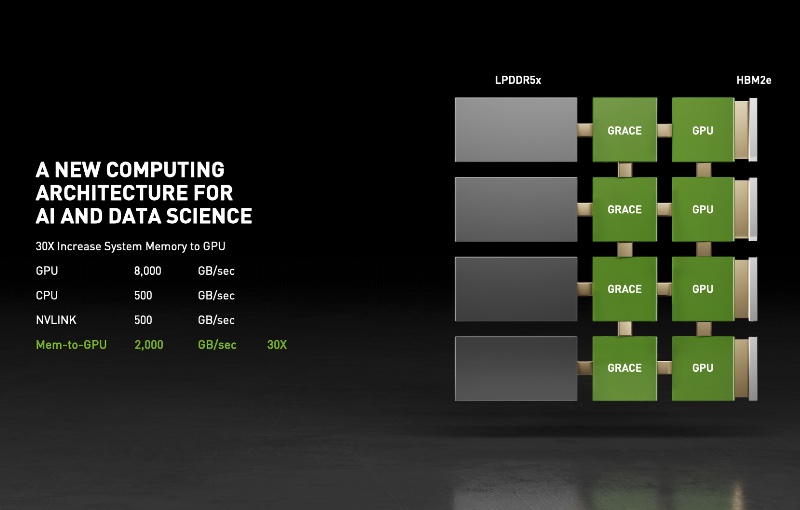 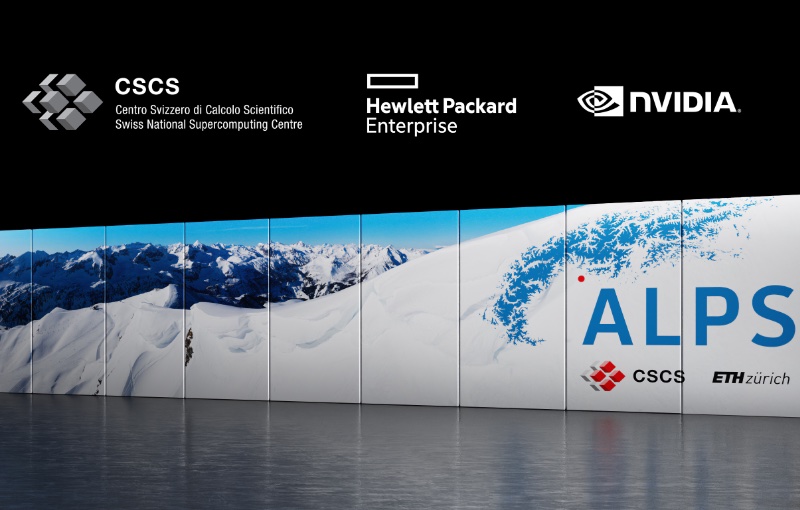 An early adopter of Grace and partnership announcements were also made during GTC 2021. 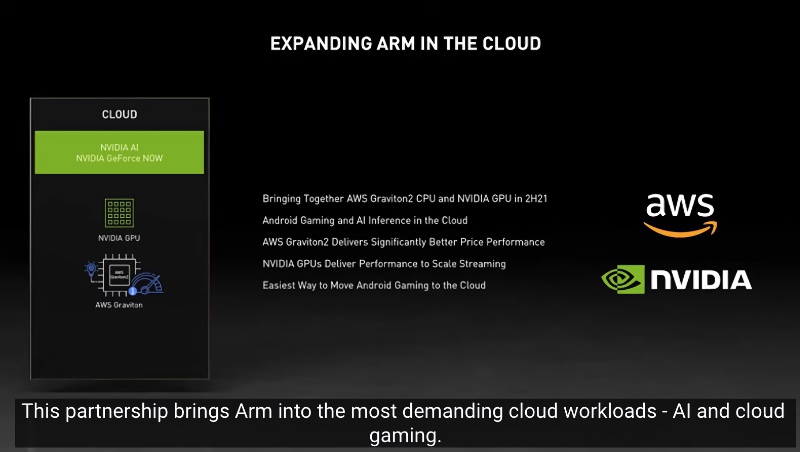 In the cloud, NVIDIA announced it will provide GPU acceleration for Amazon Web Services (AWS) Graviton2, the cloud-service provider’s own ARM-based processor. It says that the accelerated Graviton2 instances will provide rich game-streaming experiences and lower the cost of powerful AI inference capabilities.

In High-Performance Computing (HPC), the new NVIDIA ARM HPC Developer Kit provides a high-performance, energy-efficient platform for supercomputers that combine Ampere Computing’s 80-Arm core Altra CPU with the latest NVIDIA GPUs and DPUs. Labs such as Oak Ridge and Los Alamos National Labs in the U.S. as well as national labs in South Korea and Taiwan will be among its first users. 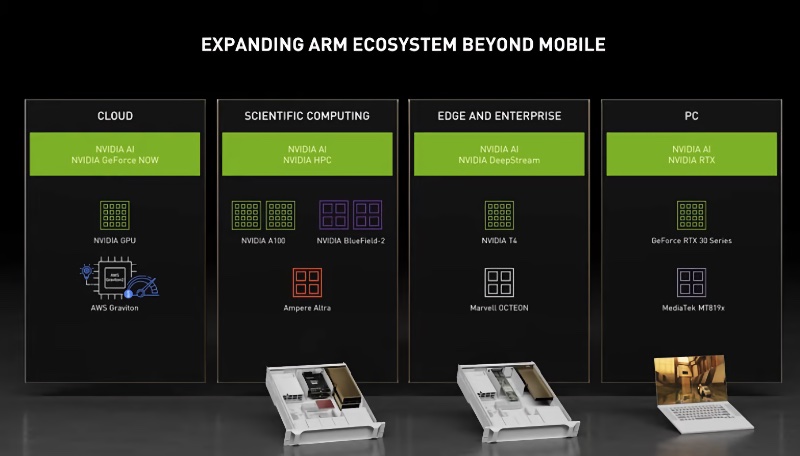 In PCs, NVIDIA is working with MediaTek to create a new class of notebooks powered by an ARM-based CPU with an NVIDIA RTX GPU. The notebooks will use ARM cores and NVIDIA graphics and be based on a reference platform that supports Chromium, Linux and NVIDIA SDKs.

Finally, in Edge computing, NVIDIA is working with Marvell Semiconductor to develop solutions that speed up AI workloads for network optimisation and security, which will be based on Marvell’s OCTEON Arm-based processors with NVIDIA’s GPUs.

1) NVIDIA announces Drive Atlan, an SoC for cars that delivers over 1,000 TOPs

Join HWZ's Telegram channel here and catch all the latest tech news!
Our articles may contain affiliate links. If you buy through these links, we may earn a small commission.
Previous Story
NVIDIA announces Drive Atlan, an SoC for cars that delivers over 1,000 TOPs
Next Story
Samsung rumoured to unveil a triple-folding tablet in early 2022