Note: This article was first published on 21 September 2022. 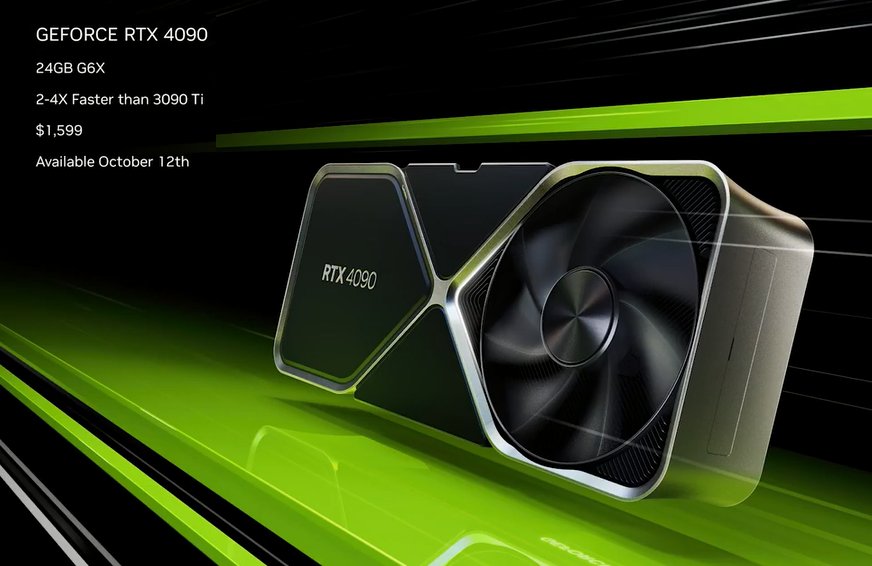 Just when you wonder how much more you can get out of the already awesome GeForce RTX 3080 Ti, NVIDIA shattered all our expectations out of a next-gen gaming GPU by throwing up their new Ada Lovelace GPU architecture that will power the new GeForce RTX 4090 and is billed to deliver up to four times faster ray-traced performance, which is nuts! Equipped with third-gen RT cores and fourth-gen Tensor Cores for massive AI uplift that also drives its next-gen DLSS 3 capability, the Ada Lovelace GPU has a lot to offer gamers with unrivalled levels of fidelity, realism and immersion. Think of 4k gaming at the highest settings and ray-tracing on all the time. 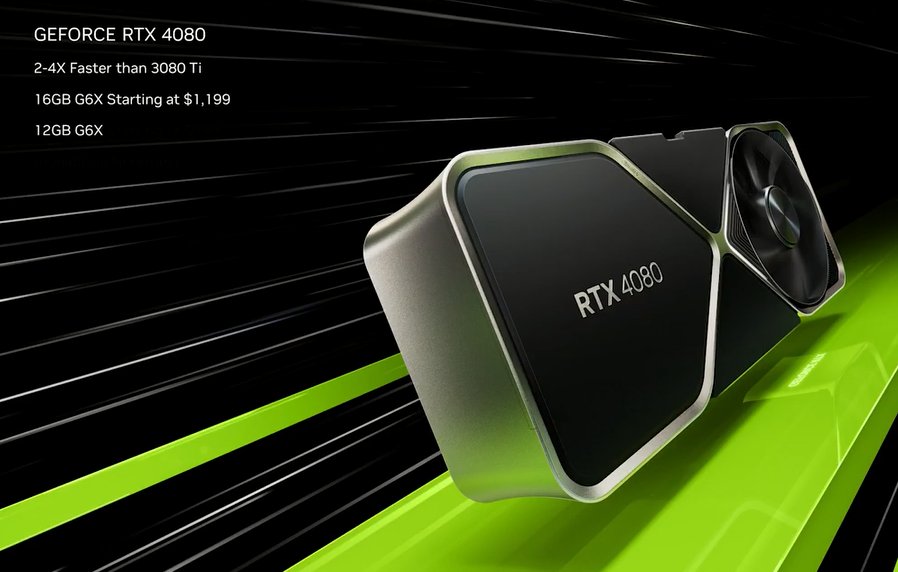 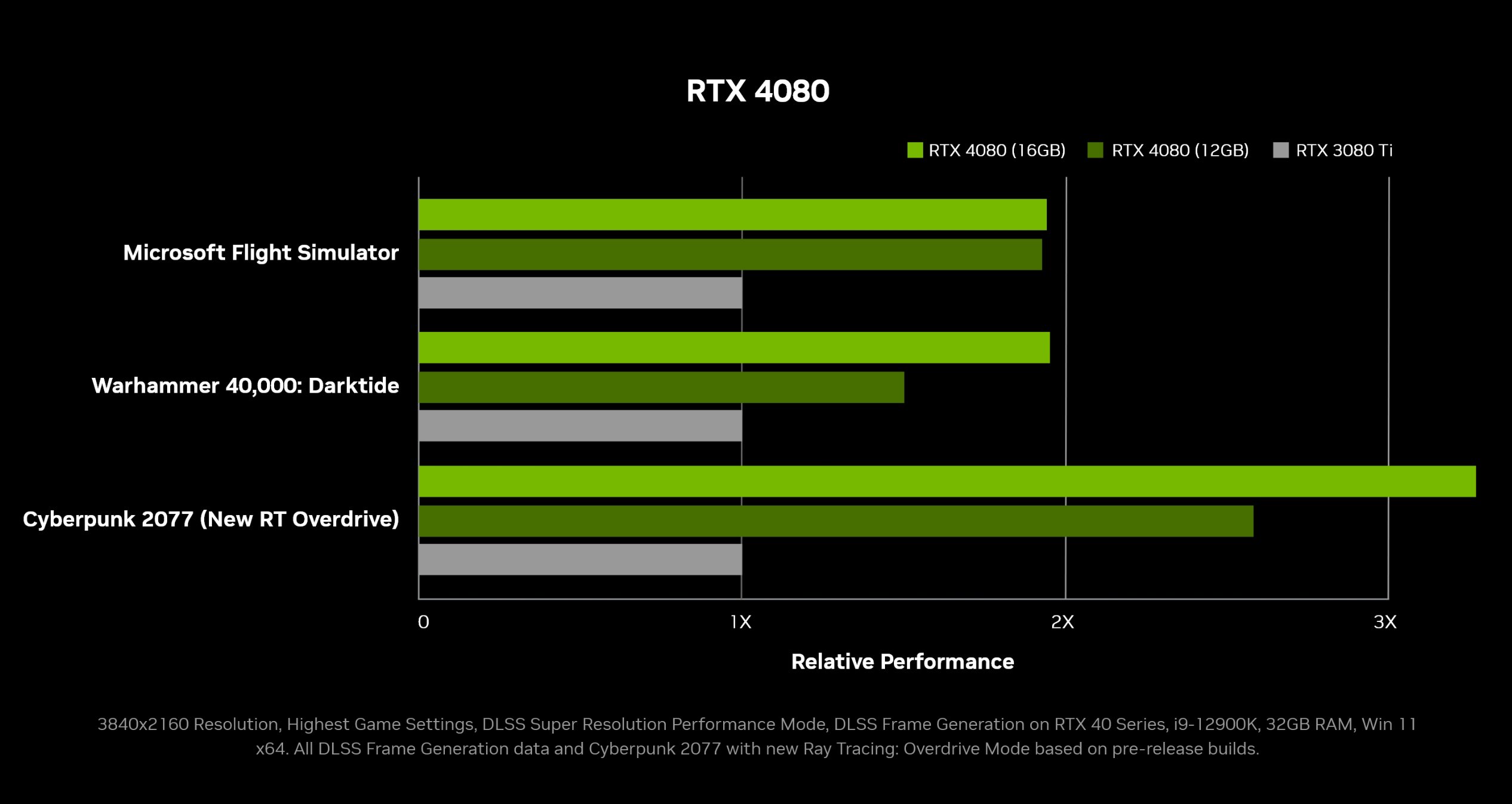 How is the GeForce RTX 40 series positioned, and how much will it cost you?

Here's a quick positioning slide of how the new GeForce RTX 40 series fits within NVIDIA's entire stack, which shows all of the GeForce RTX 3080 series and lower will be fielded together for a while to come:- 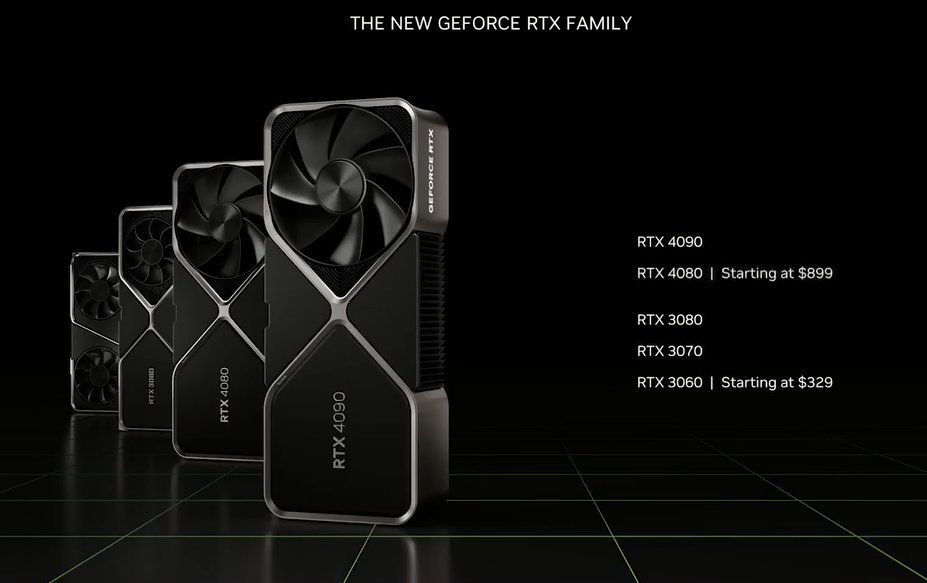 Below, this is how all the new models are priced against the older SKUs, and one thing you will notice is that NVIDIA didn't raise the price for the GeForce RTX 40 series; they are, in fact, lower, but yet are far faster than their predecessors (at least where RTX performance is concerned)! 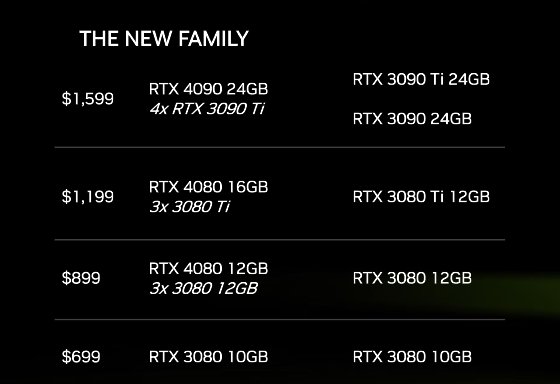 Locally, NVIDIA Singapore has advised the expected price points are as follows, and more availability information will follow suit closer to when it's expected to be made available for consumers:

A refreshed look for better cooling capacity and power delivery 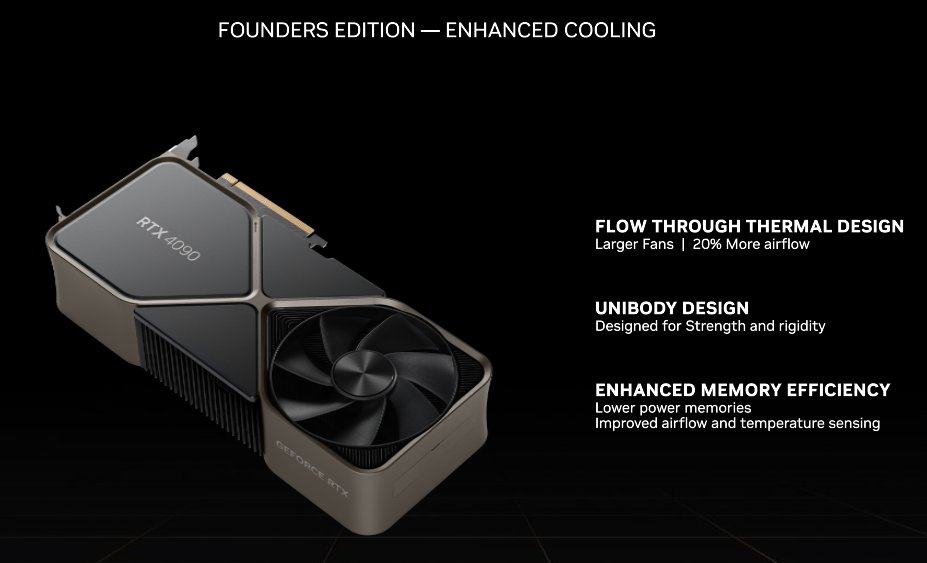 While all three launch models will have custom partner designs, only the leading GeForce RTX 4090 and RTX 4080 (16GB) will also be available in Founders Edition variants. These are only available via NVIDIA's authorized partner channels and will feature NVIDIA's signature reference design industrial look, a compact pennant-shaped PCB and a unique dual-cooler flow-through design that first debuted in the RTX 30 series. This time, the RTX 40 series Founders Editions will use a unibody design for added strength and rigidity, and larger fans to increase airflow by up to 20%. 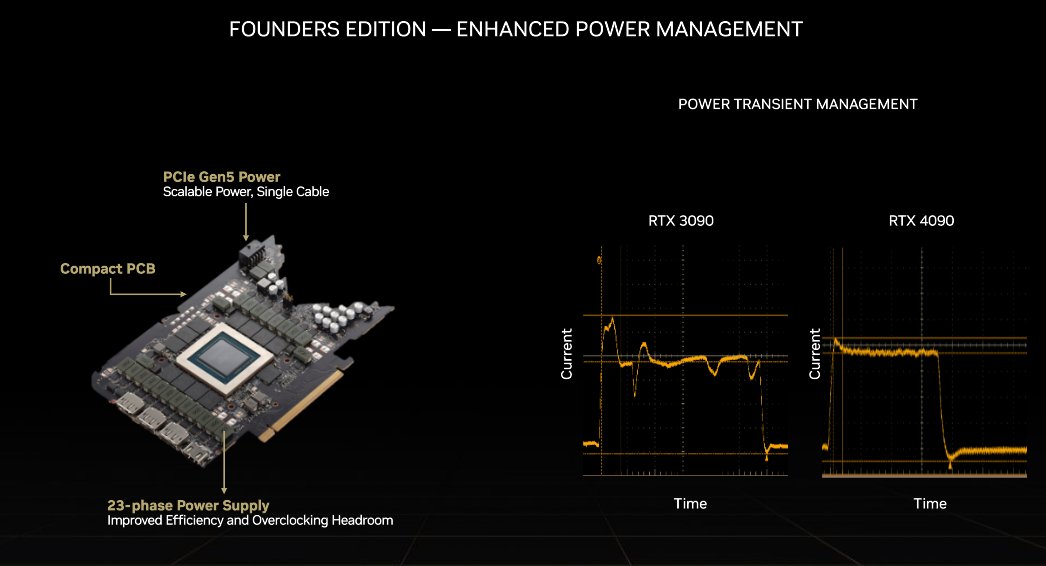 Lastly, NVIDIA says that newer Micron GDDR6X memory has been deployed on their Founders Edition RTX 40 series, which lowers temperatures by up to 10 degrees Celsius. All these strides on the RTX 40 series are almost as important as the core GPU engineering itself and we can't wait to put a GeForce RTX 4090 to the test. For now, we've some really nice close-up photos of the new Founders Edition card here:- 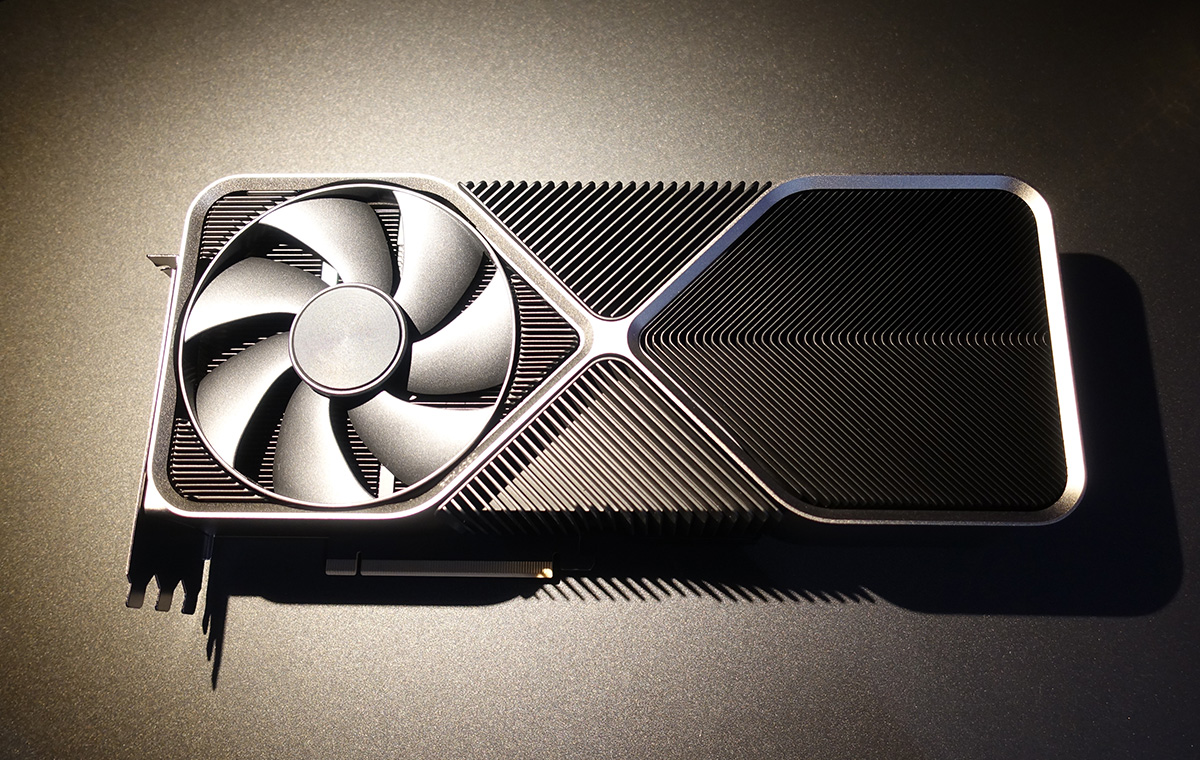 We've also got a custom-designed RTX 4090 card from ASUS with an even more outrageous design, so don't miss checking that out! 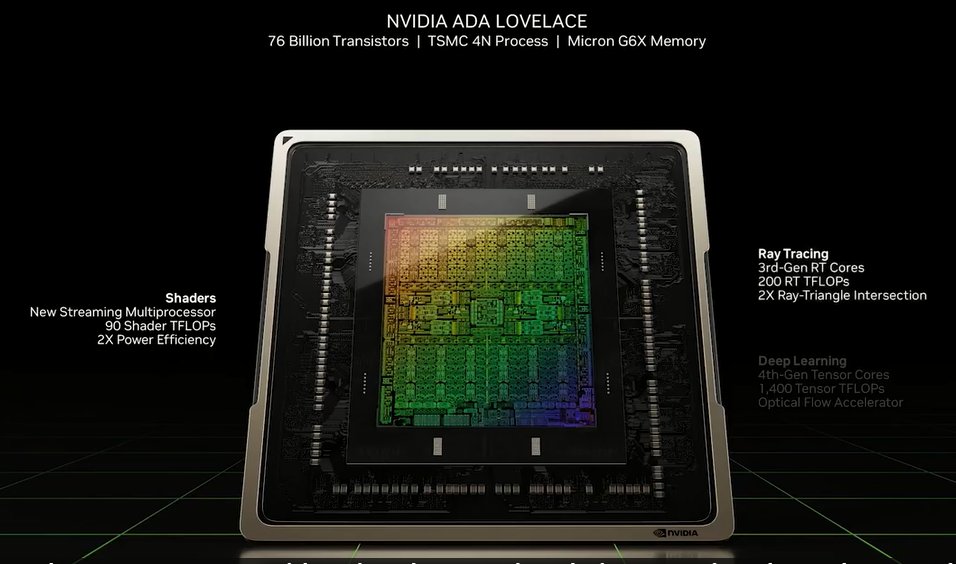 With more than twice the transistor count than Ampere GPUs and manufactured on the new 4nm process technology node, the Ada Lovelace immediate boasts massive brute force performance through far higher clock speeds (refer to the table comparison below), as well as many more CUDA, Tensor and RT cores at its disposal, in addition to the generational leap brought about by the Hopper architecture that advances each of the core's capabilities.

Of course, the Ada Lovelace architecture won't be any different from Hopper if it didn't introduce some key new features to boost gaming experiences on the GeForce RTX 40 series to keep it well ahead of the GeForce RTX 30 series. In fact, there are five key new features, which we cover in more detail in this dedicated feature. Meanwhile, here's how the new GPU SKUs compare across the board:- 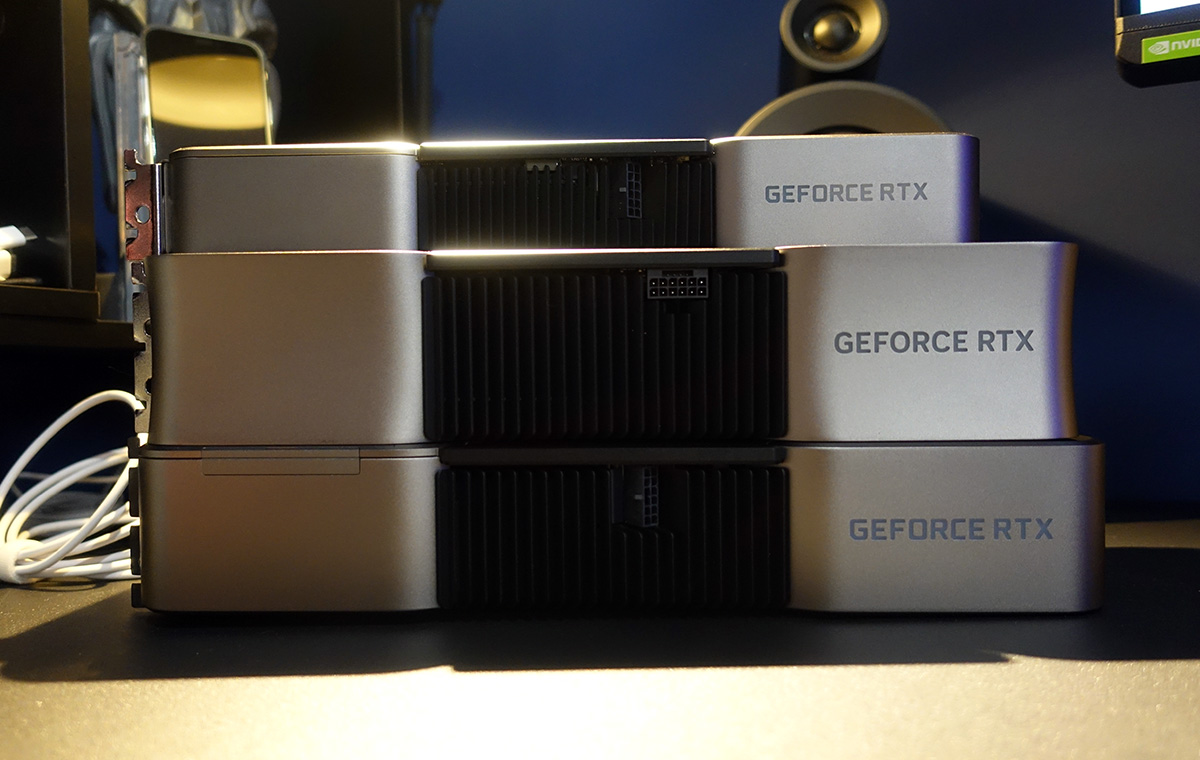 Like the GeForce RTX 3090 Ti, the new RTX 4090 is also physically a large card if you haven't yet gathered from the images earlier (and if not, this will certainly capture your attention). However, the new RTX 4090 Founders Edition is strictly a quad-slot graphics card. What that means is you need plenty of space in your case to accommodate the newcomers.

Fortunately, the RTX 4090 doesn't consume any higher power than the RTX 3090 Ti, but it's still a sizeable figure at 450W for itself. As such, the required minimum rated PSU is 850W and to feed the card will require 4x PCIe 8-pin GPU power cables OR a PCIe Gen 5 cable rated at 450W (or higher) and coupled with a PCIe 5.0 compliant PSU.

Thankfully, you won't need a new motherboard because the GeForce RTX 40 series still utilize PCIe 4.0 and NVIDIA says it still has plenty of bandwidth left on this interface. As such, they found no reason to jump on the PCIe 5.0 bandwagon, yet.

2) In pictures: The NVIDIA GeForce RTX 4090 Founders Edition is a glorious-looking card