NVIDIA finally releases the GeForce RTX 4070 Ti at US$799

NVIDIA finally releases the GeForce RTX 4070 Ti at US$799 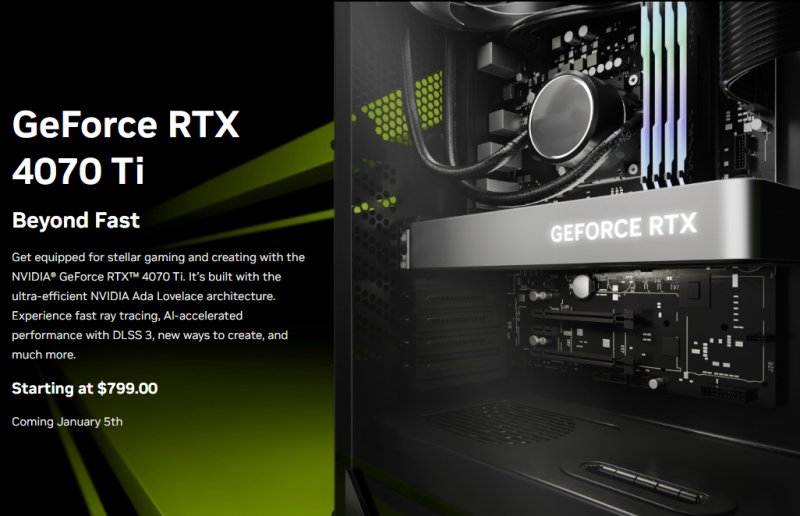 It was supposed to launch in November 2022, but the industry wasn't ready for an US$899 GeForce RTX 4080 (12GB). For one, it was mispriced, and secondly, it was confusing to have two GeForce RTX 4080 SKUs that offered very different specs and capabilities. After much industry feedback, only the GeForce RTX 4080 (16GB) was launched, while the 12GB edition went into hiding -- until today when NVIDIA officially re-christened it as the GeForce RTX 4070 Ti and will be available from 5th January 2023.

This also marks it as the first "Ti" GPU model for the GeForce 40 series of GPUs, but this is mostly because of its performance tier to cater to the already produced GeForce RTX 4080 (12GB) edition. Priced at US$799, it is purposely positioned to undercut AMD's recently launched US$899 Radeon RX 7900 XT, as well as a direct replacement to the GeForce RTX 3080 (12GB).

As can be expected of GeForce RTX 40 series GPU, the RTX 4070 Ti is also based on the amazing Ada Lovelace GPU architecture like its flagship brother, just 'chiselled down' to suit its output capabilities. Key features like its third-gen RT cores and fourth-gen Tensor Cores enabling DLSS 3 immersion are all intact. In NVIDIA's published standings, the 1440p DLSS performance of the RTX 4070 Ti is easily up to twice as fast as the GeForce RTX 3080 (and you can refer here for relative standings against an RTX 3080 Ti):- 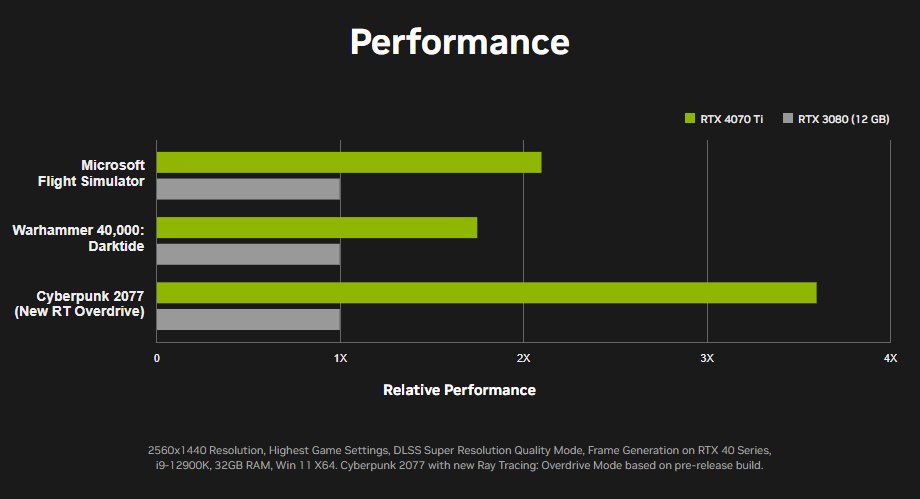 In a nutshell, NVIDIA claims you're getting GeForce RTX 3090 Ti levels of performance at less than half the price and power requirements. Speaking about power, the RTX 4070 Ti still relies on the new 16-pin 12VHPWR power connector, though because the GPU demands far less power (285W TDP), NVIDIA states that the card will only require the equivalent of twin 8-pin PCIe graphics power cables and a suitable converter adapter which is supplied in the box. As such, PSU-wise, you're pretty much sorted if you have any standard 700W power supply, which is the least recommended spec by NVIDIA when pairing the GPU with a powerful CPU like the Ryzen 9  5900X.

We've managed to get an ASUS GeForce RTX 4070 Ti for a thorough review of this new mid-range champ, so do hop over to see what to expect out of this new SKU.

Join HWZ's Telegram channel here and catch all the latest tech news!
Our articles may contain affiliate links. If you buy through these links, we may earn a small commission.
Previous Story
Apple's mixed reality headset could have waist-mounted battery and digital crown
Next Story
Cooler Master ushers in the future with ridiculous Orb X gaming pod and haptic chairs