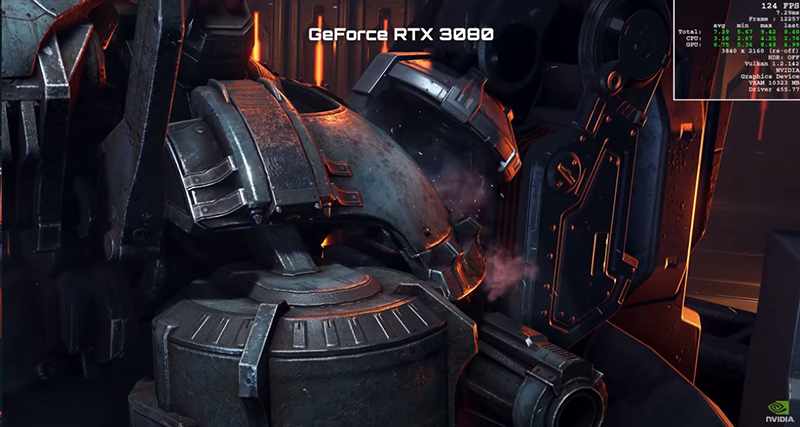 NVIDIA's launch of the GeForce RTX 3070, 3080 and 3090 promised some amazing performance, but it was notably missing actual benchmark numbers in games. Now, NVIDIA has released a live gameplay comparison video of the GeForce RTX 3080 and RTX 2080 Ti running Doom Eternal at 4K at maximum settings.

While we'll have to wait till we get our hands on the card itself to verify these results, NVIDIA's own numbers show the GeForce RTX 3080 making quick work of the RTX 3080 Ti, beating it by around 50 per cent with frame rates in the range of 130 to 170FPS. These are some seriously impressive numbers, and if they pan out, NVIDIA could really have a true winner on its hands, especially considering its US$699 price tag. To put things in perspective, the GeForce RTX 2080 Ti debuted at US$1,199.

While NVIDIA's Turing cards have been widely criticised for being super pricey, Ampere looks like it may upend the value equation with its eye-watering performance and reasonable prices. If you're looking to play a AAA game at 4K on your 144Hz screen, the GeForce RTX 3080 looks like your go-to card. In comparison, the GeForce RTX 2080 Ti was billed – in retrospect – more modestly as a 4K/60FPS card.

That said, this video is just a standalone example that hasn't been verified by independent reviewers, so it's impossible to say for sure if the GeForce RTX 3080 will maintain this performance advantage across the board. NVIDIA will definitely have cherry-picked a best-case scenario to showcase Ampere's capabilities, but as far as numbers go, it's looking very promising.