Of the JetStream cards, the Super JetStream version differentiates itself in the form of higher clock speeds, to the tune of a 1,708MHz base clock, compared to the reference clock of 1,607MHz. Other than that, both cards share the same dual-fan JetStream cooler, which comes with expected features like semi-passive fans, RGB lighting, and a beefed-up 8-phase power design.

On the other hand, the GeForce GTX 1080 GameRock features a blue-and-white cooling shroud with a more modest 1,645MHz base clock and 1,784MHz boost clock. The metal backplate even has the GameRock branding emblazoned on it, but we’d hazard a guess and say that this look isn’t really for everyone. However, the GameRock Premium has a slightly more aggressive overclock, with a 1,746MHz base clock and 1,885MHz boost clock. 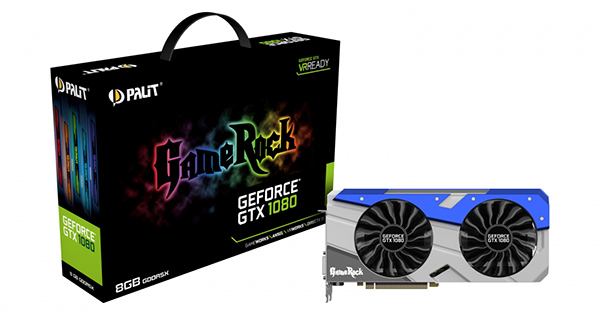 According to Palit, the heatsink on the GameRock cooler has a denser design, which when combined with the large copper base, helps improve cooling performance over the reference design.

Other features include a honeycomb mesh at the rear for better airflow, dual BIOS, and an 8+2-phase power design.

Palit has equipped all its custom cards with an additional 6-pin PCIe connector for more overclocking headroom.

Zotac also debuted the GeForce GTX 1080 AMP Edition and AMP Extreme, but it has thus far left out details like clock speeds and price. The cards are equipped with two- and three-fan cooling shrouds respectively, and both feature Zotac’s new Spectra lighting that illuminates the front of the GPU and the backplate with any color you desire.

They utilize Zotac’s IceStorm cooling solution, which really just involves an aluminum heatsink attached to six copper heatpipes that are in direct contact with the GPU. In addition, Zotac highlighted the size of its fans – the GeForce GTX 1080 AMP Edition features two 100mm fans, while the AMP Extreme version has three 90mm blowers.

Finally, the company said it had overhauled its FireStorm GPU-tweaking software with new features, of which the Spectra lighting is a part. You’ll be able to adjust things like the color, brightness, and lighting effects in the software, and the user interface has reportedly been tweaked to be more intuitive and easier to use, with things like individual controls for each card in SLI configurations.