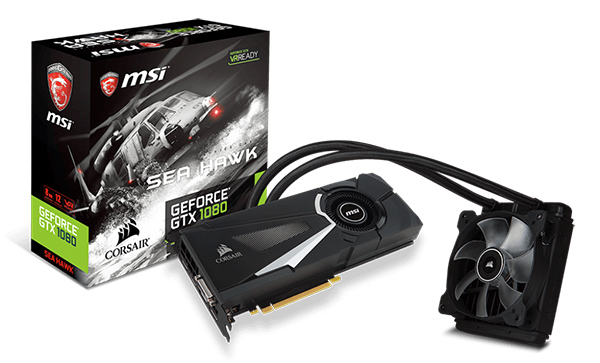 When it comes to standing out among a sea of custom cards with many overlapping features, MSI looks to have done an excellent job. The company has announced multiple variants of the GeForce GTX 1080, including one with closed-loop AIO liquid cooling solution from Corsair.

Here’s a list of everything that was announced (prices have been added where available):

The MSI GeForce GTX 1080 Sea Hawk is equipped with a Corsair H55 Hydro Cooler, and has been factory overclocked to a 1,708MHz base clock and 1,847MHz boost clock.

A new Twin Frozr VI cooler has also been introduced on the MSI GeForce GTX 1080 Gaming X 8G, which likewise features a 1,708MHz base clock and 1,847MHz boost clock in OC mode. The cooler now features 8mm copper heatpipes and a solid nickel-plated copper baseplate to maximize heat transfer away from the GPU, in addition what MSI says is a “premium” thermal compound. According to MSI, the heatsink itself has also been designed to better channel air onto the copper heatpipes, while special deflectors help to enlarge the surface area available to heat dissipation. On top of that, the Torx fans, now at version 2.0, have been redesigned with a steeper curved blade for increased airflow. This is also the only GeFroce GTX 1080 from MSI to feature an additional 6-pin power connector, so it’s clearly designed with overclocking in mind.

The Armor cards use MSI’s Armor 2X thermal solution, which boast a monochrome design for those of you who are a stickler for color-coordinated builds. As on the GeForce GTX 1080 Gaming X 8G, the Torx fans on these cards can spin down when idle, and the aluminum fins have been designed direct air toward the heatpipes. The OC version has a 1,657MHz base clock and 1,797MHz, but the two Armor cards are otherwise the same. Then there are MSI’s Aero cards, which are also nearly identical to each other, save for the fact that the OC version has been overclocked to a 1,632MHz base clock and 1,771MHz boost clock. These use blower-style fans, so heat is exhausted out the back as in Founders Edition cards.