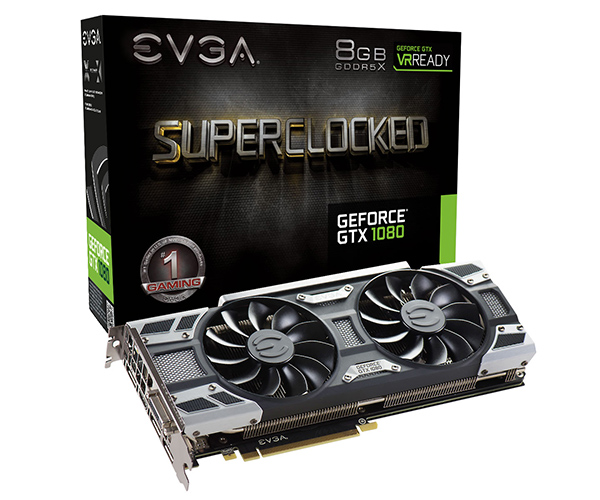 EVGA has taken the chance to debut a brand new cooler on custom versions of the GeForce GTX 1080. As is typical of EVGA, there are multiple flavors of the card featuring a wide variety of clock speeds.

So far, the company has announced four custom cards as follow (prices have been included, where available):

However, EVGA has held back on releasing all the details pertaining to the cards. Clock speeds for the Classified and FTW cards are still not known, but it did reveal that the SC card will have a base clock of 1,708MHz and boost clock of 1,847MHz, while the regular ACX 3.0 card will follow reference speeds.

What they all have all in common is the new ACX 3.0 cooler, which includes additional heatpipes and a more efficient heatsink design. The cooler also features two 0dB double ball bearing fans that can stop spinning when the card is idle, and which employ a swept fan design intended to improve airflow and consume less power.

In addition, the ACX 3.0 cooler now has a dedicated memory and MOSFET cooling plate that is in direct contact with the memory and power regulation modules. The company claims this helps the relevant components operate up to 13 percent cooler than the reference design.

Custom lighting has also been thrown into the mix, and the cards feature illuminated mesh grills that can be set to your color of choice. However, the RGB lighting is only available on the higher-end cards, and standard ACX 3.0 coolers will have white LEDs instead. 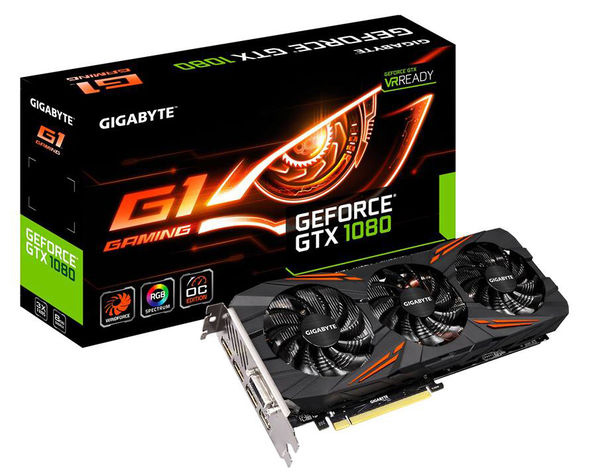 On Gigabyte’s end, it has announced the GeForce GTX 1080 G1 Gaming. The card will feature Gigabyte’s signature WindForce 3X cooling solution, but with some enhancements. The company says the three WindForce fans have been redesigned and are different from previous iterations, but it did not elaborate further on what benefits this would bring.

The traditionally stealthy WindForce cooling shroud has also been adorned with red accents, and the top of the shroud features an illuminated Gigabyte logo and familiar fan stop light. Both of these are backlit by RGB LEDs that can be tweaked via Gigabyte’s OC Guru II utility. In OC mode, the card even has a fairly aggressive base clock of  1,721MHz and boost clock of 1,860MHz.

Finally, Gigabyte added that it puts the GPUs that go into its GeForce GTX 1080 G1 Gaming cards through a binning process that selects for above average power efficiency and lower power consumption. While that looks like the cards might overclock better, Gigabyte has opted to stick with just a single 8-pin power connector, so enthusiasts might look to a future Xtreme Gaming edition – which Gigabyte said is coming as soon as next week – for more tangible overclocking gains.