NVIDIA GeForce GTX 1070 custom cards are here, and there's a lot of them (Updated) 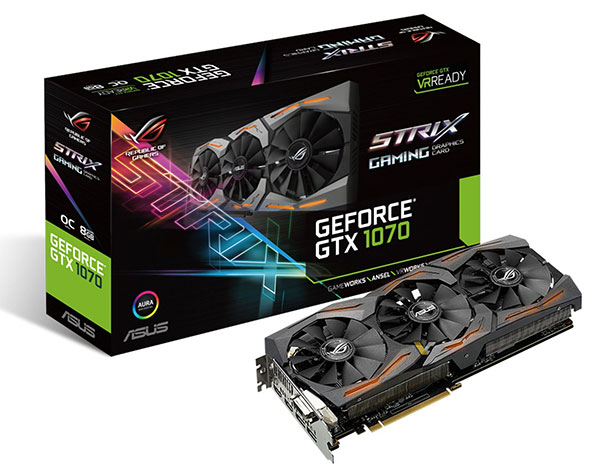 NVIDIA GeForce GTX 1070 Founders Edition cards from various brands are already available to buy at S$768, but you’re probably curious what the different vendors have cooked up, especially after the US pricing of custom GeForce GTX 1080 cards turned out to be less than the Founders Edition variant (which doesn’t even come with things like triple-fan coolers, factory overclocks, or extra power connectors).

As it turns out, brands are sticking to the same formula. This means more or less the same selection of cards as there was with the GeForce GTX 1080, complete with goodies like customizable RGB lighting. As with the GeForce GTX 1080, ASUS has unveiled two variants of the ROG Strix GTX 1070 – an overclocked version with boosted clock speeds and another clocked at reference speeds.

That aside, the cards are identical, and they feature the same DirectCU III triple-fan cooler, semi-passive wing-blade fans that have been engineered to increase airflow and static pressure, and heatpipes that are in direct contact with the GPU.

And like the ROG Strix GeForce GTX 1080, both cards also feature ASUS FanConnect technology, which is a new way of controlling chassis fan speeds by linking them – via two 4-pin fan headers – to the GPU instead of the CPU. GPU temperatures are apt to exceed those of the CPU, so this helps to ramp up cooling when it is most needed.

Other notable features include ASUS’ Aura RGB lighting on both the shroud and backplate, which you can customize with your choice of color and illumination effect. Then there’s the inclusion of a second HDMI port (in place of a third DisplayPort connector), which allows you to connect a VR headset and HDMI display simultaneously.

The overclocked version of the ROG Strix GTX 1070 retails for S$829 locally.

Join HWZ's Telegram channel here and catch all the latest tech news!
Our articles may contain affiliate links. If you buy through these links, we may earn a small commission.
Previous Story
NVIDIA brings a new level of performance to the masses with the GeForce GTX 1060
Next Story
MSI expands its stable of Pascal cards with the GeForce GTX 1070 and 1080 Gaming Z