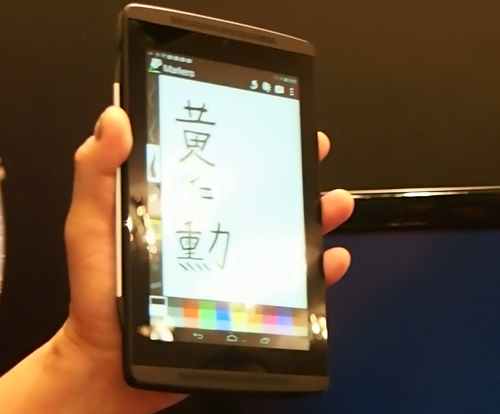 NVIDIA CEO Jen-Hsun Huang today appeared at an exclusive session at Computex 2013 where he demonstrated the image processing capabilities of the Tegra 4 processsor in improving stylus input on Android tablets.

Making the first appearance at the session was a Tegra 4 technology development platform, which seemed to sport a 7 to 8-inch display. The device utilizes two technologies, image processing and the third generation DirectTouch (a feature that was first implemented on Tegra 3 to enhance the touchscreen experience on tablets) for its palm rejection feature.

During the demonstration, Huang was able to use the stylus naturally to draw lines of different thickness based on the pressure applied to the tip of the stylus. In addition, he was able to erase his drawings or notes by simply using the opposite end of the stylus.

This is very impressive since existing stylus concepts rely on a combination of software interface navigation and hardware to achieve the same results. Huang also claimed that this technology is able to "reduce the cost of the stylus from US$20 for digital stylus to zero".

While Huang did not specify a time frame as to when this technology will be implemented commercially, we reckon that NVIDIA will stand to benefit from this as there is a growing trend of mobile devices with styluses. Check the video below for a more in-depth look:

Join HWZ's Telegram channel here and catch all the latest tech news!
Our articles may contain affiliate links. If you buy through these links, we may earn a small commission.
Previous Story
Corsair Unveils Carbide Air 540 and Carbide 330R Cases at Computex 2013
Next Story
Biostar Hi-Fi 3D Audio Technology Showcased at Computex 2013