Update (May 15, 2013): NVIDIA has just announced the availability of Shield, its Android-powered handheld gaming console. It is priced at US$349 and the company is accepting pre-orders from 20th May for customers in United States and Canada only. These residents are also able to place their orders with NVIDIA's retail partners. 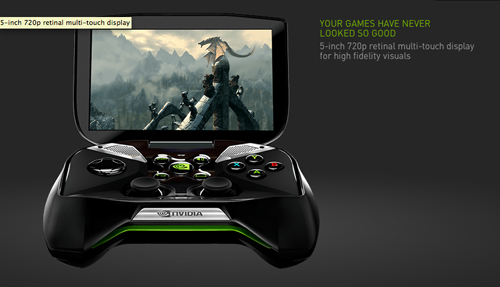 NVIDIA made a couple of major announcements today at CES 2013. Apart from announcing their new Tegra 4 processor, they have also lifted the curtains off of their all-new handheld gaming console, codenamed Project Shield.

As you'd expect, powering it is the new Tegra 4 processor and it will allow the Project Shield handheld console to play console-quality games and also push 4K resolution video content over HDMI to external displays. The console will also have advanced sound processing circuitry that NVIDIA claims will rival Beats Audio-equipped notebooks and also a 38Wh battery that can provide five to ten hours of playtime or up to 24 hours of HD video playback.

As for display, NVIDIA is fitting the unit with a 5-inch, 720p Retinal multitouch display with 294ppi pixel density. There's also a slot for microSD memory cards. Finally, the console will run pure Android - no skins - which means users will be able to access the hundreds of thousands of apps on the Google Play Store and without any overheads.

One of the coolest thing about Project Shield is that apart from being able to play all the Android games from the Google Play Store and Tegra Zone, users can also stream games from a Windows equipped PC, thus letting Project Shield users access their collection of PC Games (including Steam games).

There's no word yet on pricing, but NVIDIA says gamers can expect Project Shield to be available in the second quarter of this year. For now, we leave you with this mini video presentation of what Shield is made up of:-