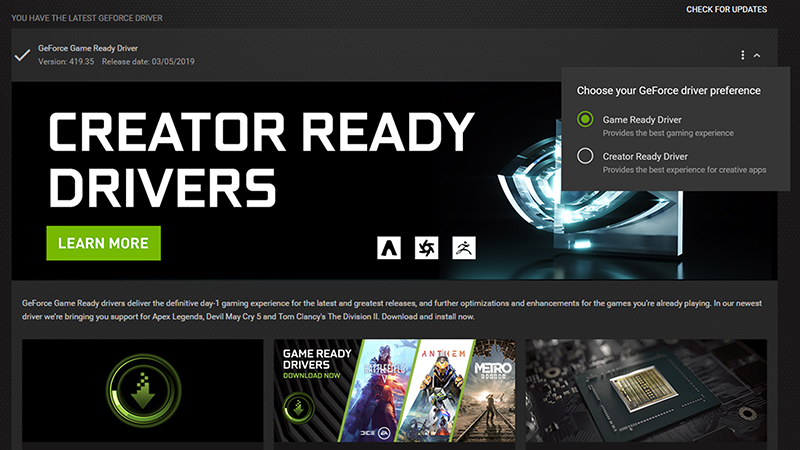 NVIDIA has released a new graphics driver for its GeForce cards dubbed the Creator Ready Driver, a surprising move for a line of cards generally targeted at gamers. The new driver has been optimized for some of the more popular creative apps like Autodesk Arnold and Adobe Lightroom, but it seems aimed less at professionals and more at enthusiasts looking to dabble in content creation.

NVIDIA already has its range of Quadro products for professional creators and designers, including their own certified drivers, so the Creator Ready Driver looks like a nice middle-of-the-road option for those who don't need a Quadro card or possess the resources to purchase one.

The first Creator Ready Driver is version number 419.67, and it's currently available to download here. At the moment, it only works with Windows 10 64-bit, but NVIDIA lists extensive support for Kepler, Maxwell, Pascal, Turing, and Volta GPUs in the accompanying release notes.

The Creator Ready Driver is not exclusive to these creative programs and contains optimizations for games as well, featuring updated SLI profiles for new games like Anthem and Apex Legends. NVIDIA says it will continue to release Game Ready Drivers when the latest PC games launch, and both the Game Ready and Creator Ready Drivers will include the full feature set and application support for games and creative apps. However, creators will now have the option to receive designated driver releases that have undergone more stringent testing.