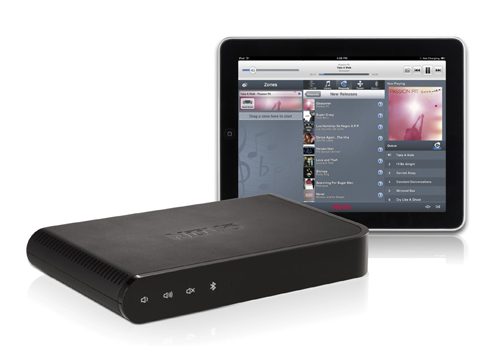 Nuvo is a company that has been well known for their tailor made and customized wireless, home audio solutions and systems. At CES 2013, they have released one of their wireless audio products which can be installed by the end user themselves.

The new Nuvo Wireless Audio system comprises of three components, namely the P100 and the P200 music players along with the GW100 network gateway. The players are compatible with most commonly used audio formats including MP3, AAC, WMA and FLAC. They are also capable of accessing internet radio from services such as Pandora. A USB 2.0 port helps with playback from external storage or portable music players.  Both players also offer 3.5 mm stereo analog in and analog out mini jacks.The analog in will accept any analog line level audio signal, with the players providing signal amplification. The analog outprovides the line level signal to an additional amplifier, powered subwoofer, or headphones. The P200 also incorporates a third mini jack for future applications.

Important to note that the music players do not have any built-in loudspeakers and that they are designed for use with external stereo speakers such as floorstanding, bookshelf or table-top models. Both players use energy-efficient digital amplifiers optimized for playback of streaming digital music and provide gold 5-way binding posts for stereo
speaker connections. The P200 provides up to 60 watts of power per channel while the P100 supplies 20 watts per channel (2 channels in total).

The GW100 network gateway employs dual band concurrent and MIMO (multiple in and multiple out) wireless technologies. This means that the Nuvo Wireless Audio system can make use of both 2.4GHz and 5Ghz bands for the purpose of streaming. The GW100 has a range of approximately 300 feet and can serve an average 4000 sq. ft house. The entire system can stream to 16 simultaneous streams at 600 Kbps and be controlled from your smart device with the help of a application.

Join HWZ's Telegram channel here and catch all the latest tech news!
Our articles may contain affiliate links. If you buy through these links, we may earn a small commission.
Previous Story
Samsung Introduces Revamped Smart Hub and S-Recommendation with Voice Interaction Feature on 2013 Smart TV Range
Next Story
NZXT Launches HALE90 V2 PSU Series with 80 Plus Gold Certification