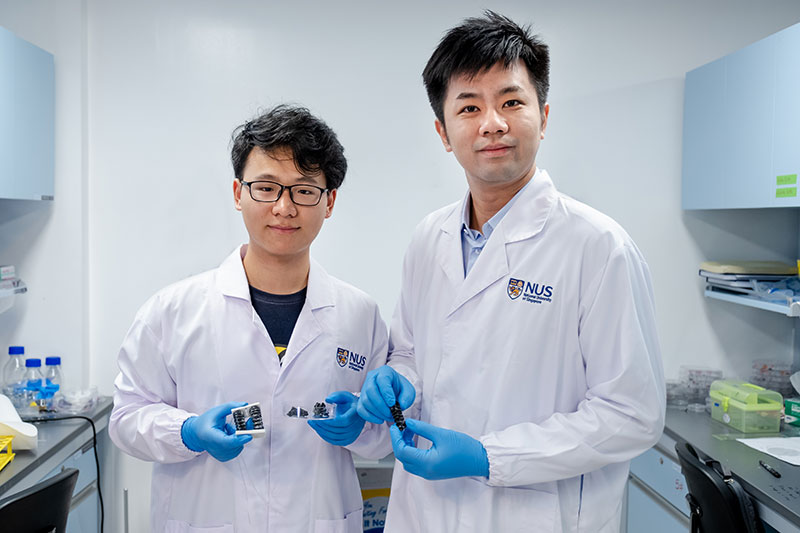 Origami robots sound like the stuff of science fiction. They're soft and flexible and some of them can even fold into certain shapes all by themselves when heated. These robots have been tested for use in a wide range of scenarios, including drug delivery in human bodies and search and rescue missions.

Because they need to be flexible, they're often made from soft materials such as paper, plastic, or rubber. Sensors and electrical components are then added on top, which inevitably makes the devices more bulky. To get around this, researchers from the National University of Singapore have developed a new metal-based material that can give the robots strain-sensing and communication capabilities without the need for any external electronics.

The material is electrically conductive, so it can function as its own wireless antenna and talk to a remote operator or other robots. This also expands the scope of origami robots, since they can now be remotely-controlled and operated in high-risk environments such as the site of a chemical spill.

According to the university, the new material can be up to 60 per cent lighter than their conventional counterparts. The lighter weight means that it is also more power efficient, while still maintaining the foldable characteristics of paper or plastic.

In addition, it is fire-resistant and can withstand harsh environments of up to 800°C for 5 minutes. It has on-demand geothermal heating capabilities too, where sending a voltage through the material will cause it to heat up, which can prevent damage from ice when the robot is working in the cold. All these properties make it suitable for use in the creation of light and flexible search and rescue robots that can enter disaster zones while providing real-time communication and feedback.

The material was created using a process called graphene oxide-enabled templating synthesis. Cellulose paper is soaked in a graphene oxide solution, before being dipped into a solution comprising metallic ions such as platinum. It is then burned in argon, an inert gas.

The result is a thin layer of metal that is 70 per cent platinum and 30 per cent amorphous carbon, or ash. This metal is flexible and can bend, fold, and even stretch, but the research team is looking to improve it further, such as by incorporating electrochemically active materials that will let it act as its own battery.

Join HWZ's Telegram channel here and catch all the latest tech news!
Our articles may contain affiliate links. If you buy through these links, we may earn a small commission.
Previous Story
Huawei AI lab in Singapore opens with plans to help the country fill its IT skills gap
Next Story
Get a two-pack Google Nest Wifi with MyRepublic's new 1Gbps bundle