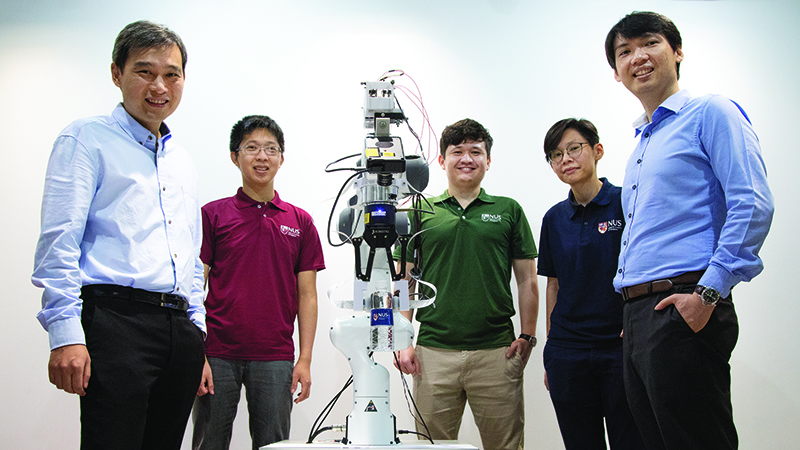 Season 3 of Westworld may have featured many Singapore landmarks in a fictitious setting, but new research by NUS scientists may bring the world of human-like robots into real-life sooner than we expect. And it might very well be powered by Intel inside.

Assistant Professor Harold Soh (top photo, left) and Assistant Professor Benjamin Tee (top photo, right), together with their team of researchers, have successfully developed artificial skin that can detect touch more than 1,000 times faster than the human sensory nervous system and identify the shape, texture, and hardness of objects 10 times faster than the blink of an eye.

In their initial experiment, the researchers used a robotic hand fitted with the artificial skin to read Braille, passing the tactile data to Intel’s Loihi neuromorphic computing chip through the cloud to convert the micro bumps felt by the hand into a semantic meaning.

Loihi achieved over 92 percent accuracy in classifying the Braille letters, while using 20 times less power than a standard processor.

This is an important breakthrough because most of today’s robots operate based solely on visual processing and the addition of a human-like sense of touch in robotics could significantly improve current functionality and even lead to new use cases.

For example, robotic arms fitted with artificial skin could easily adapt to changes in goods manufactured in a factory, using tactile sensing to identify and grip unfamiliar objects with the right amount of pressure to prevent slipping.

The ability to feel and better perceive surroundings could also allow for closer and safer human-robotic interaction, such as in caregiving professions, or bring us closer to automating surgical tasks by giving surgical robots the sense of touch that they lack today.

On an individual and more human level, this type of electronic skin can be used to develop more realistic prosthetic limbs that will help disabled individuals restore their sense of touch.

Find out more about the NUS research here.

Join HWZ's Telegram channel here and catch all the latest tech news!
Our articles may contain affiliate links. If you buy through these links, we may earn a small commission.
Previous Story
Lenovo launches ThinkVision M14t to bring dual monitoring on the go
Next Story
These are the alleged specs of the regular Samsung Galaxy Note 20