Not all soundbars are created equally: Here's why the Sony HT-ST5000 stands out

Not all soundbars are created equally: Here's why the Sony HT-ST5000 stands out 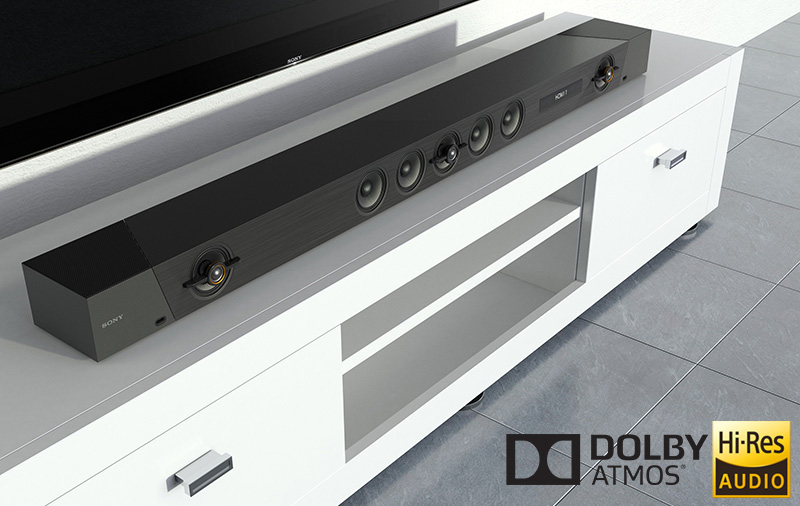 In recent years, more and more companies have been pushing out quality soundbars that really take home entertainment to the next level.  But not all soundbars are created equally, even if they highlight similar features.

ATMOS sound is what all the cinemas have been trumpeting lately, with the promise of completely immersing you in the action by letting sound flow all around you. And while you might think that you’d need the multitude of speakers of a cinema hall to get the same effect, Sony’s new top-of-the-line HT-ST5000 is able to achieve a similar effect with just one soundbar and one subwoofer, making it a much more viable option for the confines of today’s homes. 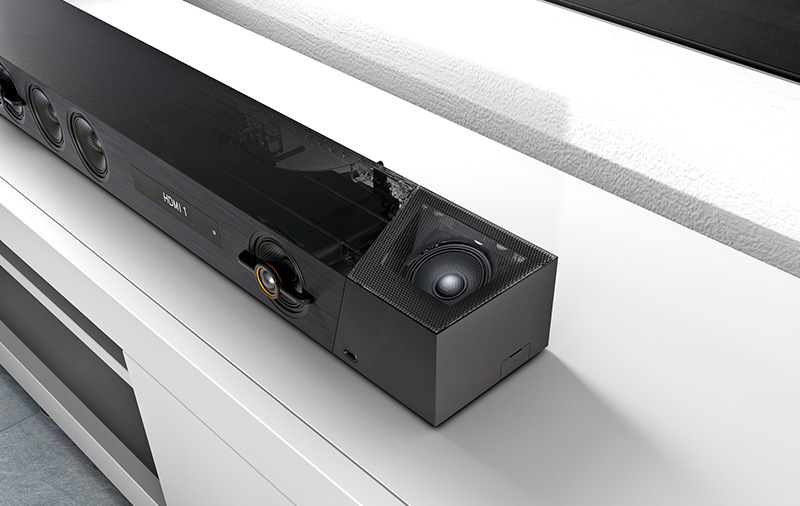 An 800W audio system, the HT-ST5000 has seven speakers firing forwards, a subwoofer unit to round out the lows, and of course two up-firing speakers to provide overhead coverage to support ATMOS sound (7.1.2 channels).

What’s different with the  HT-ST5000 compared to other ATMOS-capable soundbars though, is that it has speakers that use a magnetic fluid system for damping instead of a regular solid damper. With this magnetic fluid system, the voice coil is suspended in and moved by a magnetic fluid solution. There's no physical damper moving, so that’s one less element to introduce unwanted harmonics to the system. And the system allows the speaker to get more sound with less travel as transmission loss is minimized.

For excellent bass, the HT-ST5000’s subwoofer employs a Sigma Magnetic circuit with a large 18cm diameter driver which uses double and symmetrical magnetic flux to deliver twice the magnetic flux. The woofer thus has a faster time decay compared to conventional speakers, allowing it to produce sound closer to the original source. Suffice to say, you’ll really feel the full force of the presentation!

Unlike other soundbars which need to bounce audio off walls to achieve the surround sound effect, the HT-ST5000 combines Sony’s S-Force PRO Front Surround technology with Digital Signal Processing to create a natural sound field all around you, as you'll see from the video below.

Sony's wavefront technology sends soundwaves around you laterally, while the soundbar simultaneously uses its two up-firing ATMOS-enabled drivers to extend that field over and around you vertically. In essence, the soundbar envelops you in a bubble of sound, while using ATMOS technology to accurately place where each sound source  should be in that bubble.

With 4K UHD movies now readily available from local retailers like Poh Kim, you'll certainly be spoilt for choice. But whether it's jets flying overhead, or bullets whizzing past you, the HT-ST5000 will make you feel like you’re right in the middle of the action even though you never left your living room. In addition to ATMOS, the HT-ST5000 also fully supports DTS:X and Dolby Surround Upmixing technologies, so even regular movies and videos will get 3D-like immersive sound.

Tuned for the finest detail 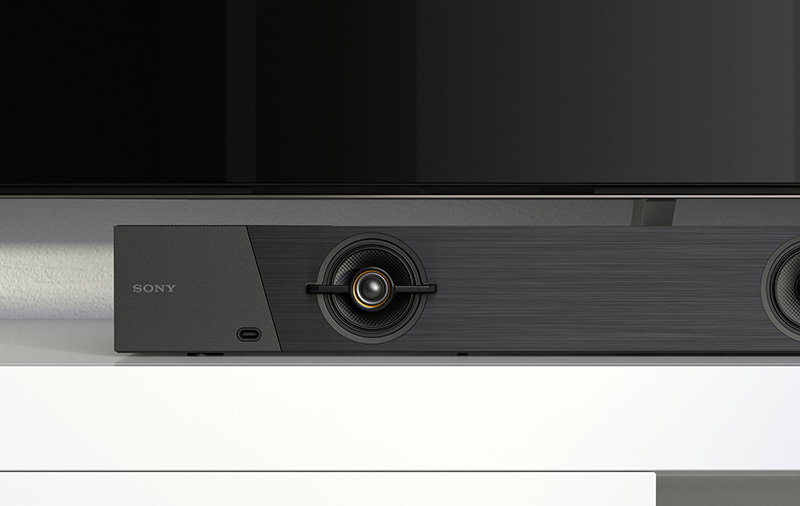 If you’re more an audio purist than a movie fan, the HT-ST5000 has you covered too. It boasts a balanced sound signature with great performance in vocals and highs, with an impressive bass response to match, making it perfect for acoustic pieces and movie watching.

It’s also compatible with the most popular audio codecs like MP3, AAC,ALAC, WMA, FLAC, Vorbis and Monkey’s Audio (.ape) , so you’ll be able to enjoy all your favorite music without having to deal with conversion. And because the soundbar is able to support recordings in up to 192kHz/24bit resolution, you’ll hear every detail and nuance from your High Resolution Audio (HRA) audio recordings. 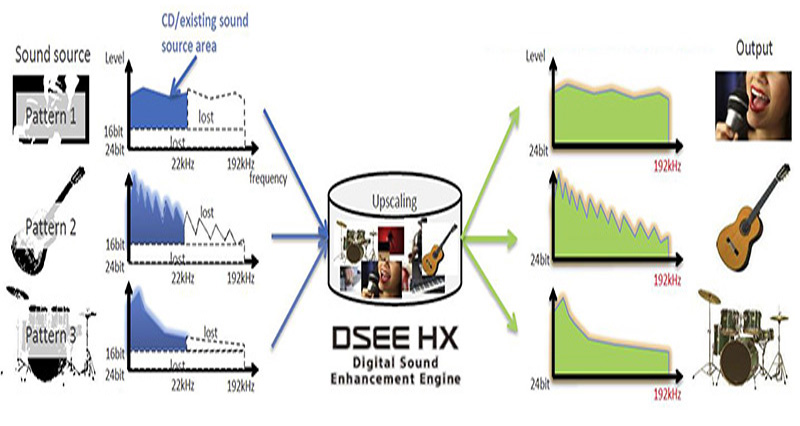 Even regular audio recordings will sound better too, as the HT-ST5000 uses Sony’s DSEE HX technology to detect and replace the lost harmonics from your audio files, bringing them to near high-resolution audio quality. This works with sources being accessed via USB and sources on your home network (i.e. wirelessly or via LAN cable) when the soundbar operates standalone (to a max of 192kHz/24bit) and as a multi-room speaker (up to 96Khz/24bit), so there’ll always be great sound around. 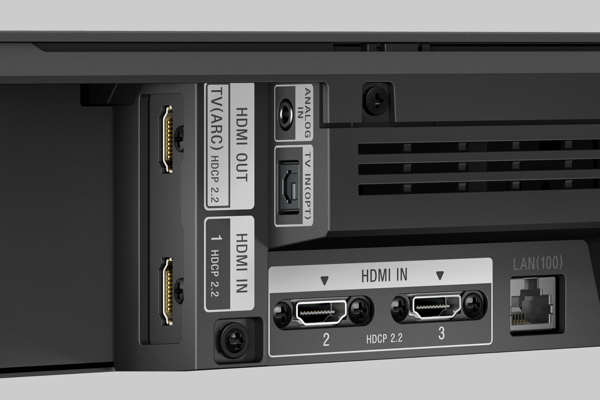 For movies and videos, the HT-ST5000 offers three HDMI inputs that are 4K/HDR compatible. There’s support for digital optical and analog connections, a USB input as well as a HDMI ARC output that’s also 4K/HDR compatible so you can pass 4K videos in full resolution to your television screen.

It also offers one-touch support for internet Music services like Spotify and Chromecast via the Music Service button on the included remote or the soundbar itself.  Of course, you can also stream music from your mobile device using Wi-Fi and Bluetooth too. The HT-ST5000 fully supports Sony’s LDAC technology, which transmits three times the amount of data compared to traditional Bluetooth transmissions, so your high-resolution files won't have to be converted to a lower quality format for transmission.

In summary, here's a table of the key features:

The HT-ST5000 is available now at all Sony Store, Sony Centre and Sony Authorised Dealers for S$2,799. Find out more at www.sony.com.sg/soundbars.

To audition the soundbar for yourself  (which we highly recommend), do head down to either of the Sony stores below. The staff will be glad to take you through all the features.

Our articles may contain affiliate links. If you buy through these links, we may earn a small commission.
Previous Story
The Nokia 2 is an entry-level 4G handset with 2 days of battery life
Next Story
Apple to drop Qualcomm entirely from the iPhone and iPad next year?