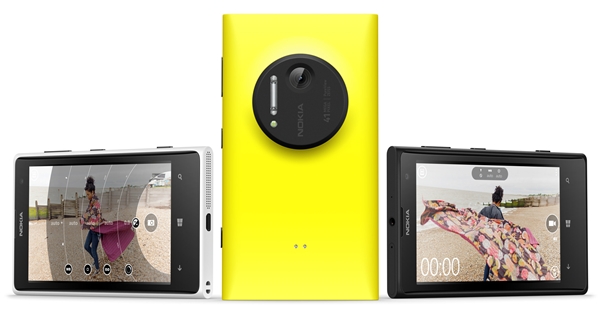 Building on the camera technologies introduced in the 808 PureView and Lumia 920, Nokia unveiled its latest camera phone, the Lumia 1020 which comes with the second generation 41-megapixel camera sensor.

The 41-megapixel camera sensor in the Lumia 1020 features ZEISS optics (formerly known as Carl Zeiss) with six physical lenses, optical image stabilization (OIS) and a Xenon flash. The rear camera can take still images at 38-megapixel in 4:3 and 16:9 aspect ratios.

Augmenting the hardware technology is a new app called Nokia Pro Camera, which makes it easy for anyone to take great pictures. The Pro Camera app comes with an easy-to-understand interface that visually demonstrates how different camera settings (e.g ISO, focus, white balance, shutter speed and exposure) will affect the final photo or video.

The Nokia Lumia 1020 will be available in three colors: yellow, white and black. It will be exclusive to U.S carrier AT&T, with sales expecting to begin on 26 July at US$299.99 with a two-year contract. Nokia states that the device will be arriving in China and Western Europe within this quarter. Availability in other markets will be announced shortly.

Join HWZ's Telegram channel here and catch all the latest tech news!
Our articles may contain affiliate links. If you buy through these links, we may earn a small commission.
Previous Story
Next Generation Chrome Packaged Apps Blurs Line Between OS and Browser
Next Story
Zotac Infuses ZBOX Nano with Intel Core Processors