Near field communication, or NFC as it is commonly known, is a wireless standard that allows information to be transmitted via a mere tap of the device, with an NFC chip. Unlike quick recognition (QR) codes that is limited to just a read mode, NFC chips allow users to program specific info or actions to the chip, and the code can be re-written based on the user preference.

Moving along that concept, Nokia is introducing the Singapore NFC Hub, a site allowing businesses to order NFC tags and posters for commercial purposes. According to Nokia, the tags are priced at S$5 per chip and it will be pre-programmed according to your business needs. This could run along a wide range of campaigns, such as having a URL being sent to the tapped device or even specific actions such as dialing a number and sending an SMS. 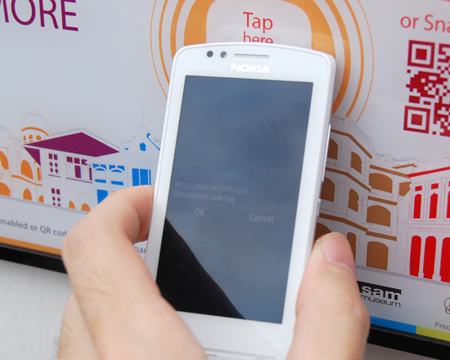 One such example is Nokia's partnership with Singapore taxi operator ComfortDelGro to offer an NFC-enabled option as part of its FastCall automated taxi booking services at over 400 locations across Singapore. Gary Chan, Nokia's Head of Ecosystem & Developer Experience (EDX) for Singapore, Malaysia and Brunei, explains that the system only calls upon the phone to send an SMS to a predetermined number for ComfortDelGro, with no other personal information being sent or stored.

Companies that are focused on social networks such as Facebook and Twitter can also utilize NFC through specialized campaigns. For example, having an NFC-enabled phone being used to "Like" a Facebook page, doing a Foursquare check-in and even adding more Twitter followers is all done with a simple tap.

One of the biggest challenge for NFC to take off in any country, is having a strong infrastructure that's easily accessed by smartphone users. Nokia has also announced a partnership with the National Heritage Board (NHB) and SMRT Corporation Ltd (SMRT) to showcase an estimated 25 landmarks within the Bras Basah Bugis (BBB) precinct including the Singapore Art Museum (SAM), Singapore Philatelic Museum (SPM), The Peranakan Museum (TPM). Various iMobSMRT spaces across the SMRT network will allow commuters to tap their NFC-enabled smartphones and learn more about the BBB precinct through their devices. Nokia and SMRT are planning to roll out the iMobSMRT spaces at more stations throughout the entire SMRT network over the next few months. 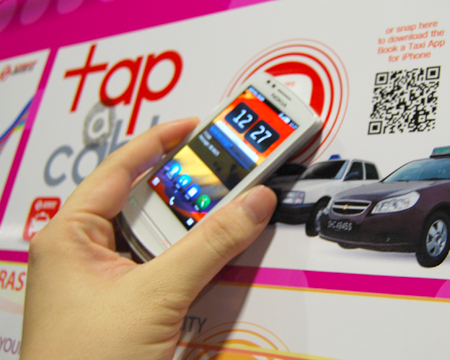 Nokia currently has the most NFC-enabled smartphones in Singapore, with the Nokia 603, Nokia 700 and Nokia 701, Nokia C7 and Nokia N9 available for purchase. However, the various NFC options aren't limited to Nokia devices. According to Chan, any NFC-enabled devices can perform the same functions when it's tapped onto the NFC tags. For now, only the Samsung Nexus S (launched earlier this year), RIM BlackBerry Bold 9900 and the recently announced Samsung Galaxy Nexus come with NFC capabilities.