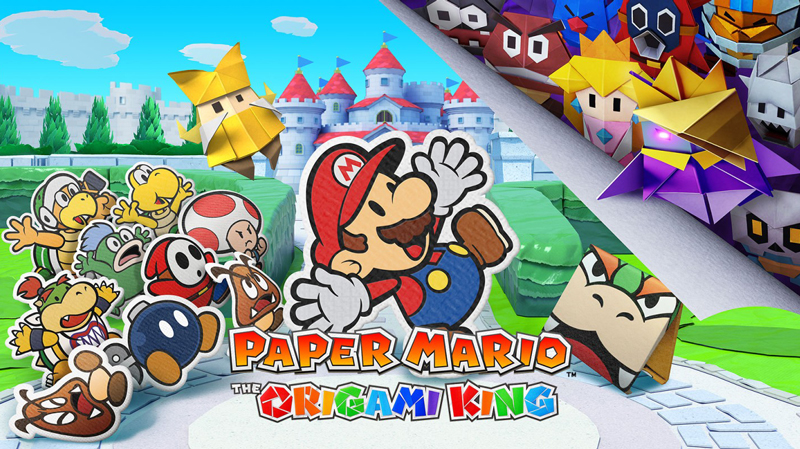 The beloved Paper Mario series is getting a new installment on the Nintendo Switch, titled Paper Mario: The Origami King. The game throws origami into the series’ adorably paper-themed artstyle and will launch two months from now, on July 17, 2020.

Paper Mario: The Origami King proves that the Mushroom Kingdom can never find peace for long. In this game, the royal King Olly has kidnapped the entirety of Princess Peach’s castle and recruited Bowser’s army to solidify his claim to the throne. Our favourite Italian plumber is forced to forge an uneasy alliance with his nemesis Bowser, as well as King Olly’s sister Olivia to defeat the usurper king.

Mario has gained some cool abilities in this game, such as the power to stretch out his hands accordion-style, to interact with the environment in new ways. The series’ combat system has been revamped as well, with a new ring-based battle system. It looks like this game will also keep RPG elements from previous Paper Mario titles, as well.

Nintendo has consistently knocked it out of the park with brilliantly unique artstyles for their games, from the fuzzy cuteness of Animal Crossing: New Horizons to the claymation-like Link’s Awakening remake. Paper Mario: The Origami King looks just as good - though this seems like a pretty big announcement to just throw out two months before the game’s release.

2020 is a huge year for the Super Mario franchise! It’s the 35th anniversary for 1985’s Super Mario, and the event has been celebrated with a new Super Mario Lego set, Uniqlo clothing collection, massive Super Mario Maker 2 update and, according to leaks (which included this Paper Mario game), multiple remasters of iconic Super Mario games coming to the Nintendo Switch.

Join HWZ's Telegram channel here and catch all the latest tech news!
Our articles may contain affiliate links. If you buy through these links, we may earn a small commission.
Previous Story
Sony's new footage of Ghost of Tsushima's gameplay is breathtaking
Next Story
MediaTek's new Dimensity 820 chipset will bring 5G to dual-SIM phones