The next OS for Mac is called macOS Catalina

The next OS for Mac is called macOS Catalina The next OS for Macs will be called macOS Catalina and it was just unveiled at WWDC 2019.

If you are wondering, it's named after the Santa Catalina Island just off the coast of California.

Obviously, macOS Catalina has a ton of new features but let's go through some of the important ones here. 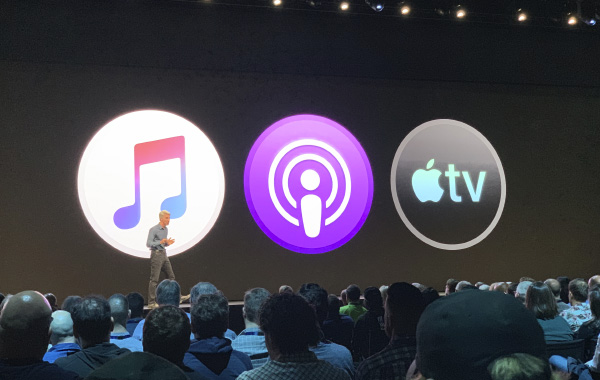 As rumored, Apple has finally put iTunes to bed. It will be succeeded by three standalone apps: Music, Podcasts, and TV. If you relied on iTunes for syncing stuff to your iOS device, that task will be taken over by Finder. Read more about this move here. A rumored feature that is coming to macOS Catalina is the ability to use the iPad as a secondary display to your MacBook. You can use it simply as an extended display or, with the Apple Pencil, use it as a high precision drawing tablet. Best of all, it works wirelessly so you don't need to carry around a cumbersome cable. Apple has been concerned about the amount of time users are spending on their devices and introduced Screen Time on iOS 12 last year. Now, Screen Time is coming to macOS to give Mac users a better idea about how they are using their Macs. For parents, it's an invaluable tool for monitoring and controlling their kids usage on the Mac.

Find My and Activation Lock Find My is a new app that can potentially help you find your Mac should you misplace it or should it be stolen. Macs will now occasionally broadcast a Bluetooth signal which will be picked up by surrounding Apple devices to create a mesh networks of sorts. This will then give the users a rough idea of where their Macs might be — kind of like how the Tile tracker works.

Activation Lock is also coming to the Mac to make it a less attractive target for thieves. It works just like on your iPhone or iPad. If it's activated, the Mac will be protected by your password/passcode the moment you turn on the above mentioned Find My feature. Without the password, the thief cannot activate the Mac at all, even if it has been remotely wiped by the owner. No macOS update will be complete without updated apps and macOS Catalina will be getting a bevy of updated apps including Photos, Safari, Mail, Notes, and Reminders.

For example, Safari will now harness the power of Siri to serve up a new starting page with frequently visited sites, iCloud tabs, Reading Lists selections, and even links in Messages.

What started out as Marzipan is now offically known as Project Catalyst. In a nutshell, it is a way for developers to quickly port their iPad apps over to macOS. Some iPad apps that are coming to macOS include the Jira Cloud app for enterprise use and Twitter.

macOS Catalina will be available as a free update later this year in Fall. Members of the Apple Developer Program can get the developer preview starting today, while a public beta program will be available in July.

Join HWZ's Telegram channel here and catch all the latest tech news!
Our articles may contain affiliate links. If you buy through these links, we may earn a small commission.
Previous Story
As rumored, iTunes will be replaced with standalone Music, TV, and Podcasts apps
Next Story
iPads are getting their own special version of iOS called iPadOS