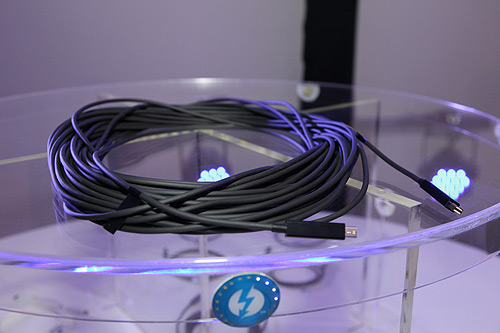 Intel's current version of Thunderbolt, named Cactus Ridge, already surpasses the transfer speeds offered by USB 3.0. The former has speeds of 10Gbps while the latter can only manage 5Gbps. However, the next iteration of the Thunderbolt connector, codenamed "Falcon Ridge", which is due in 2014 will be able to offer transfer speeds of 20Gbps.

Not only will Falcon Ridge be faster, it is also supposed to be able to support 4K images while handling other data transfer. With a slew of 4K panels unveiled at CES 2013 and just starting to make their way into the market, 4K support looks to be an extremely attractive feature. The new Thunderbolt will also be backwards compatible which means users can still employ their older optical cables.

Unfortunately, Intel's next Haswell processors will not be equipped with Falcon Ridge. However, selected Haswell chipsets will feature an improved Thunderbolt port called "Redwood Ridge" which provides 10Gbps transfer speeds but consumes less power while also offering support for DisplayPort 1.2.