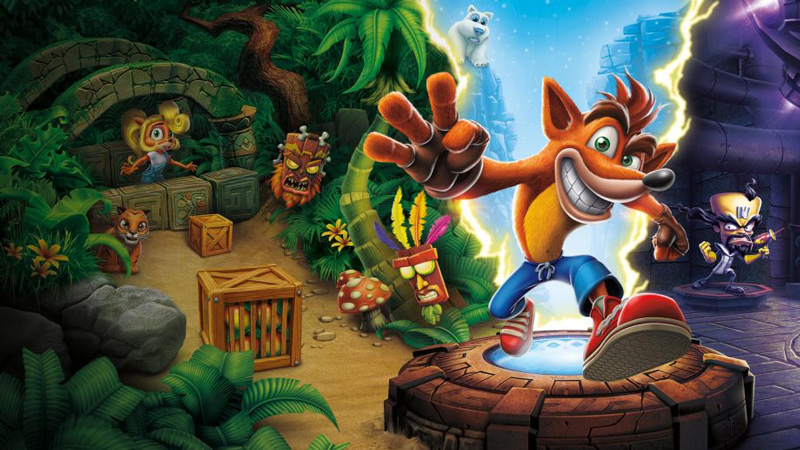 There’s a pretty good chance we’re getting a new Crash Bandicoot game - but it involves sifting through a whole bunch of leaks and rumours. Weirdly enough, it all starts with a strange floating mask in a PlayStation ad.

PlayStation recently released a new ad (It’s Time to Play), incorporating a whole bunch of video game characters going around and causing chaos. We see Kratos from God of War, some FIFA footballers, Cloud from Final Fantasy 7 and Crash Bandicoot racing with his buddies.

There was a new Crash Bandicoot racing game released this year, so he’s not out of place per se - but wait! What’s that second, mysterious mask next to Aku-Aku?

We’ve never seen a mask like that before, certainly not in Crash Team Racing this year. Why would someone go through the trouble of animating it and placing it in such a prolific ad? The current theory is that its from an all-new, yet to be announced Crash Bandicoot game, and there’s evidence that supports this.

First, you have Toys for Bob artist Nicholas Kole commenting on the situation with an enigmatic tweet, even confirming later in a reply that he’s keeping SOMETHING under wraps. He also deleted an earlier retweet of some strange new character art. You also have a new Crash Bandicoot model being used in PlayStation ads, to boot.

And then, of course, you have the leaks.

Don’t take this seriously at all. Keep expectations at complete zero. But this is from 4chan and the have been right about N. Sane and CTR before they were announced. #CrashBandicoot #PlayStation pic.twitter.com/BqmOjR1mEt

A leaker, who supposedly predicted the N.Sane trilogy and Crash Team Racing remakes, seems to think that the next Crash game is a semi-open world game similar to Super Mario 3D World. The game will be called Crash Bandicoot Worlds, and feature three all-new masks and new enemies. They also state that the game is being developed by Toys for Bob and Vicarious Visions for a December 2019 announcement.

Heard from a good Acti connection that Activision does have a new Crash game coming. And no, not specifically that 4chan leak that included World. Can’t deconfirm World, just know that’s not what I’m talking about. Vicarious seems to be it, but can’t be 100% on that part.

On the other hand, Sabi - a Twitter user who also leaked the BlizzCon 2019 game reveals accurately - confirmed that a Crash Bandicoot game IS in the works - but isn’t a semi-open world game. Instead, they think the gameplay will be ‘Naughty Dog-like’ and ‘like Super Mario Bros. 3’.

Whatever the new Crash Bandicoot game turns out to be, it does look like we’re getting something other than a remake for the first time in almost 20 years. Exciting!

Join HWZ's Telegram channel here and catch all the latest tech news!
Our articles may contain affiliate links. If you buy through these links, we may earn a small commission.
Previous Story
Leak: We might be getting a Resident Evil 3 remake in 2020
Next Story
Huawei AI lab in Singapore opens with plans to help the country fill its IT skills gap