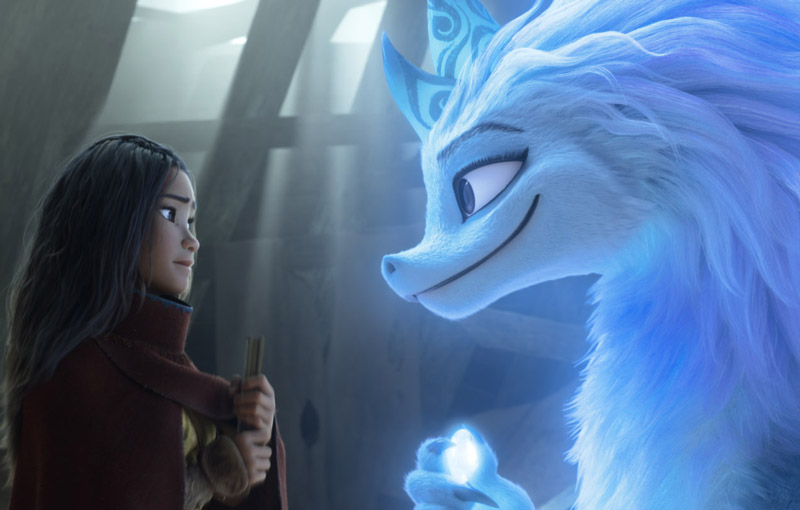 Disney’s stunning new animated movie Raya and the Last Dragon has a new trailer, revealing more of its story as well as the titular dragon. The movie is set in a fictional fantasy land called Kumandra, which incorporates different aspects of Southeast Asian culture. It also features an Asian American cast - minus Alan Tudyk, who voices Raya’s animal companion Tuk Tuk.

The trailer begins with Raya (Kelly Marie Tran) entering a lively city and encountering a lost baby. This baby turns out to be a con baby who steals all her stuff, beats her up and runs away. That’s a harsh blow against the ol’ ego. The ‘last dragon’ is also revealed later on, a bright blue creature named Sisu (Awkwafina), who also has a human form. When Raya asks her for help, Sisu warns her that she’s not, “the best dragon,” which isn’t exactly ideal for Raya’s world-saving plans.

Kumandra was once a place where humans and dragons lived together in perfect harmony, but an evil force arrived that forced the dragons to sacrifice themselves to save humanity. 500 years later, that same evil has returned and it’s up to Raya to find Sisu and restore Kumandra to its former glory. She’ll also have to unite its people, who have divided themselves up into factions that want nothing to do with each other.

Disney recently announced that Raya and the Last Dragon will premiere in theaters on March 5, 2021, after a delay from December 2020. The movie can also be streamed on Disney+ with Premier Access on the same day. To watch the movie on opening day, Disney+ subscribers will have to fork out an additional US$29.99 (around S$39).

Join HWZ's Telegram channel here and catch all the latest tech news!
Our articles may contain affiliate links. If you buy through these links, we may earn a small commission.
Previous Story
New Japanese copyright laws might make things difficult for cosplayers
Next Story
Sony launches the Xperia Pro, a smartphone with an HDMI port