Microsoft has announced that the New Office, Exchange 2013, Lync 2013, SharePoint 2013, Project 2013 and Visio 2013 are now available through Microsoft Volume Licensing for new and existing customers in Singapore to purchase. 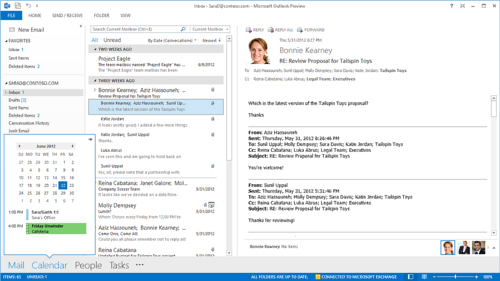 Microsoft launched its next-generation office productivity suite to businesses in Singapore today at its Southeast Asia SharePoint Conference which was attended by more than 900 IT decision makers and partners.

The New Office provides the best productivity experience across devices, regardless of whether it is a PC, smartphone or tablet, enabling users to work from virtually anywhere with access to documents and files. With new tools such as high-definition video conferencing, enterprise social networking and virtual whiteboards, businesses will benefit from new ways of collaboration while seeing reduced costs from video conferencing, telephony and travel. Office 2013 also works beautifully with touch, stylus, mouse or keyboard to give users the ultimate productivity experience.

The new Office applications work side by side with previous versions and enterprises can reduce software deployment and update costs with streaming technology. Management of the IT environment has also been simplified with a common set of familiar IT management tools across on-premises, private and public cloud environments.

The New Office
Key among the new features, The new Office brings intuitive touch features that let users go beyond merely consuming content to composing beautiful documents – whether it is on a PC, smartphone or tablet. Users can quickly access documents, files, email, calendar and contacts from anywhere, without compromising security or reliability. In addition, smarter Office applications such as Excel anticipate and recommend the most appropriate charts, tables and graphs, and auto-complete the remaining data with no formula or macros required.

Exchange 2013
The new Data Loss Prevention features in Exchange help identify, monitor and protect sensitive data through deep content analysis. Compliance officers can use the new Exchange eDiscovery Center to discover and analyze Exchange, SharePoint and Lync data stored in Exchange from a single interface. With the Exchange Administration Center – IT administrators now have a single, easy-to-use Web-based administration interface that simplifies management.

SharePoint 2013
Featuring a new and simplified user experience, SharePoint 2013 puts the user in control with drag and drop capabilities, live previews of content, the ability to edit lists inline as well as create sites in a few simple clicks. New collaboration tools include rich new microblogging, newsfeeds, communities and other social features unlock a more transparent and efficient way to work.