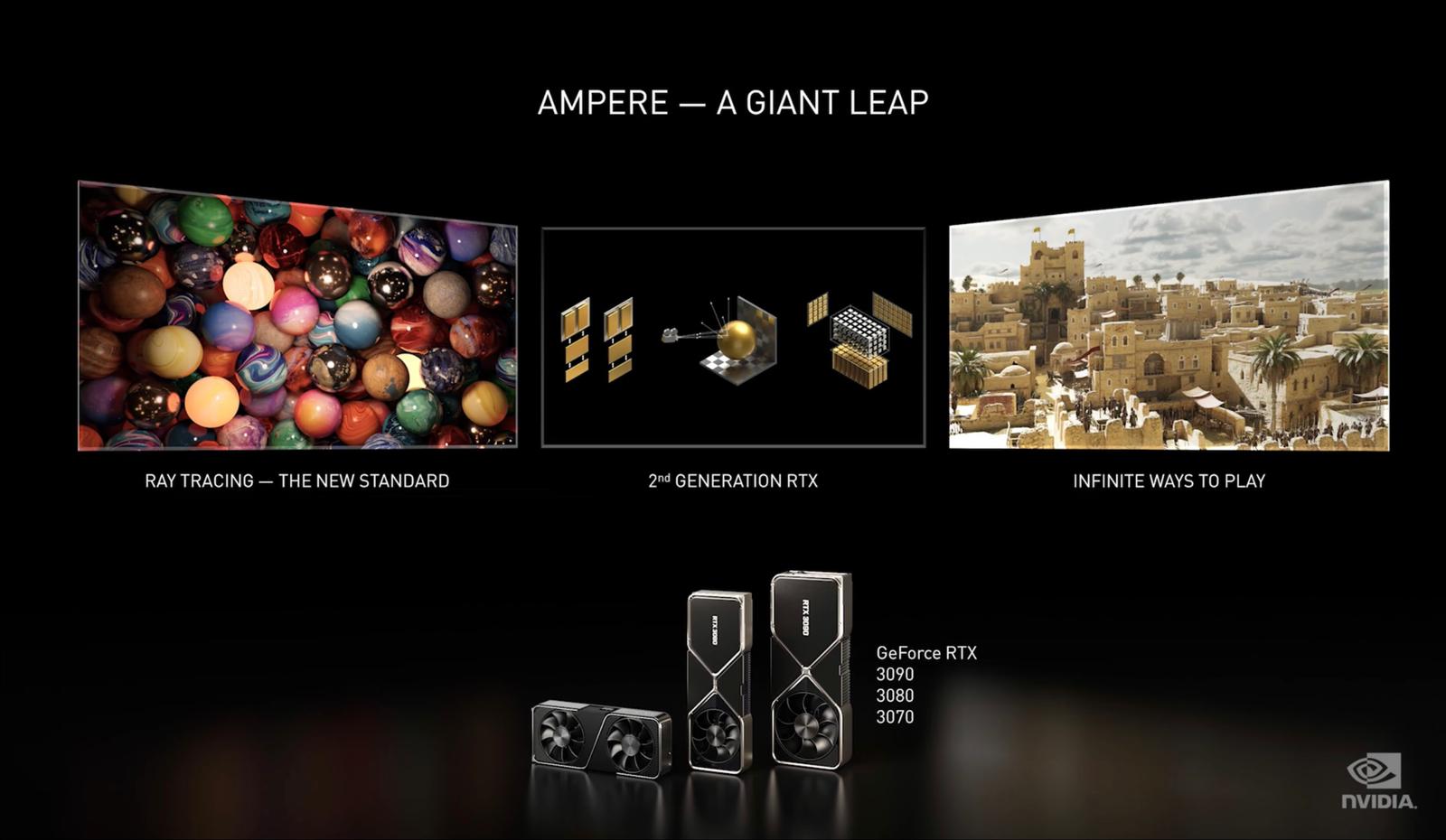 NVIDIA has finally revealed its new line of GeForce graphics cards during a webinar presented by its CEO Jensen Huang. The new GeForce RTX 30 Series, based on the company's new Ampere architecture, are designed to outperform the current RTX 20 Series exponentially. Especially in ray-tracing support and 4K (and beyond) resolution. 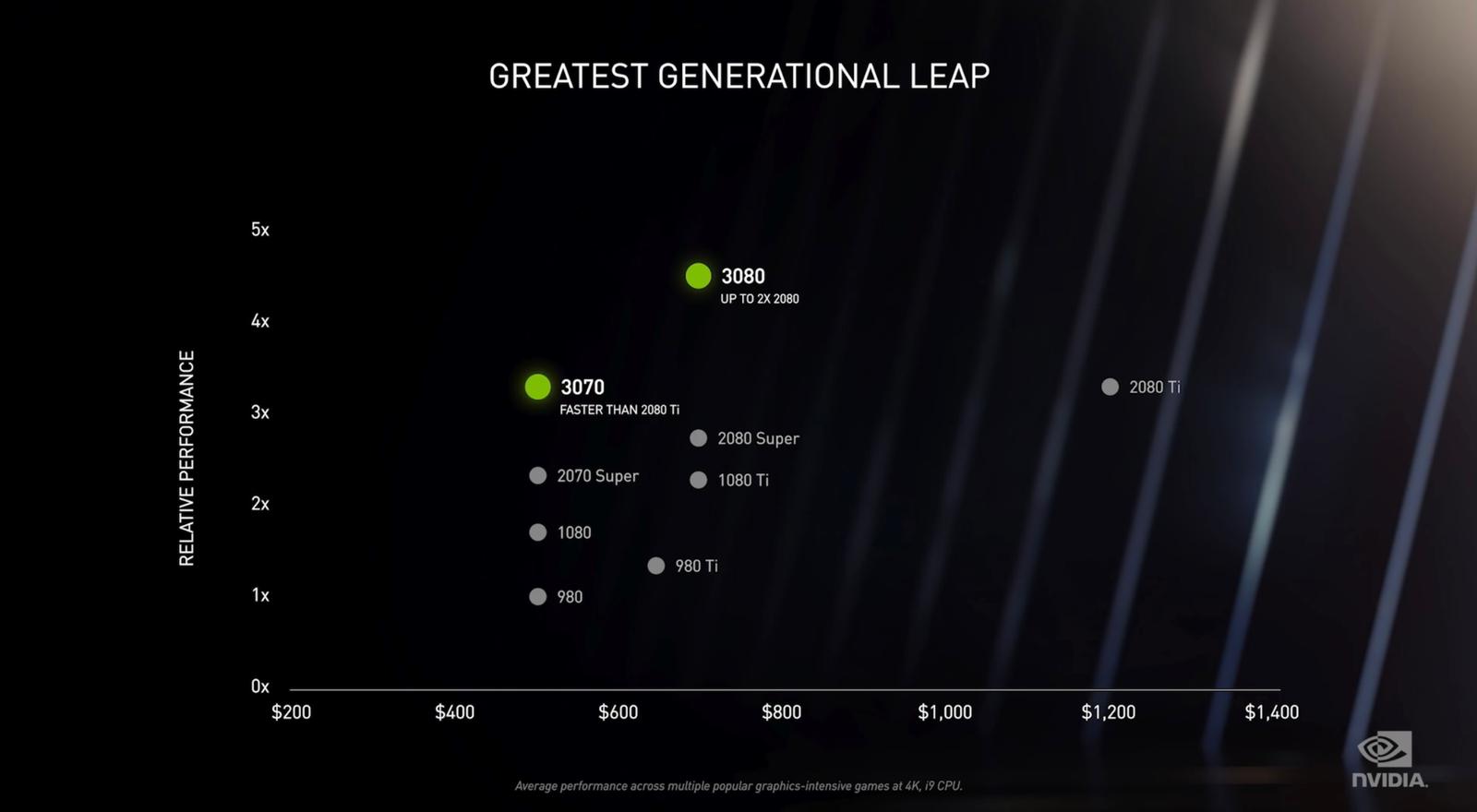 According to Jensen, the RTX 3080 outperforms up to two times that of the RTX 2080 and is vastly faster than the RTX 2080 Ti card (are we even surprised?). This is in part due to the new 10GB GDDR6X memory – capable of twice the throughput of current GDDR6 memory – and the 8,704 CUDA cores, combined with a 1.71GHz boost clock on the RTX 3080. Let's put that into perspective a little bit; the RTX 2080 Ti comes with just 4,352 CUDA cores, so the new card literally doubled up that. 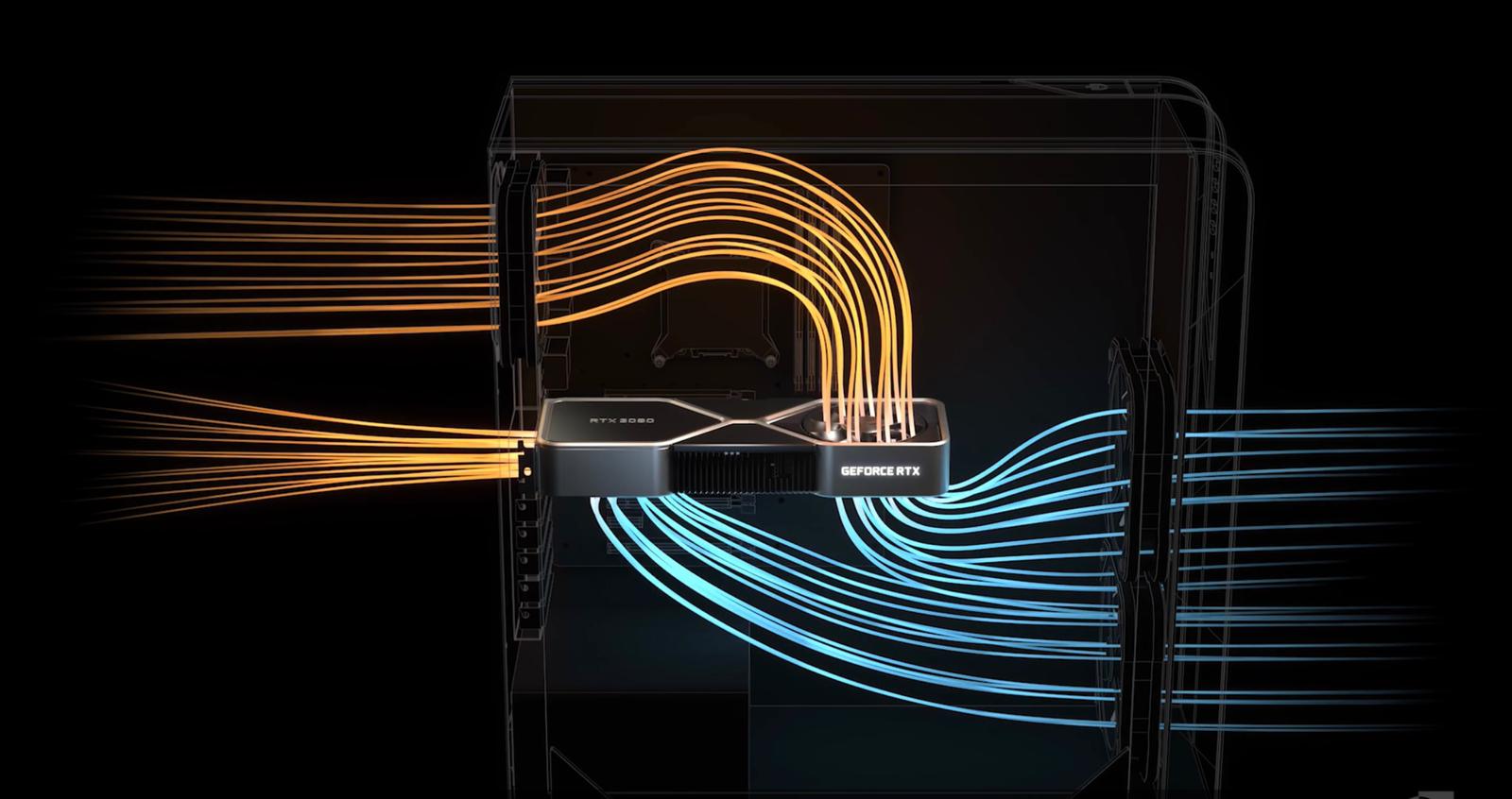 At the heart of the new Ampere architecture GPU is a radically updated thermal design. Unlike the previous Pascal and Turing-based cards, NVIDIA has created a new pennant-shaped board for the RTX 3080, combined with a new cooling shroud. The new cooling solution is designed to improve airflow and overcome some of the constraints of the cooling solutions that exist on the RTX 2080 today. The new dual-fan setup, which is a bracket exhausting front fan with a flow-through rear fan, will reportedly improve airflow by more than 55 per cent, with promises of much quieter and more efficient cooling. 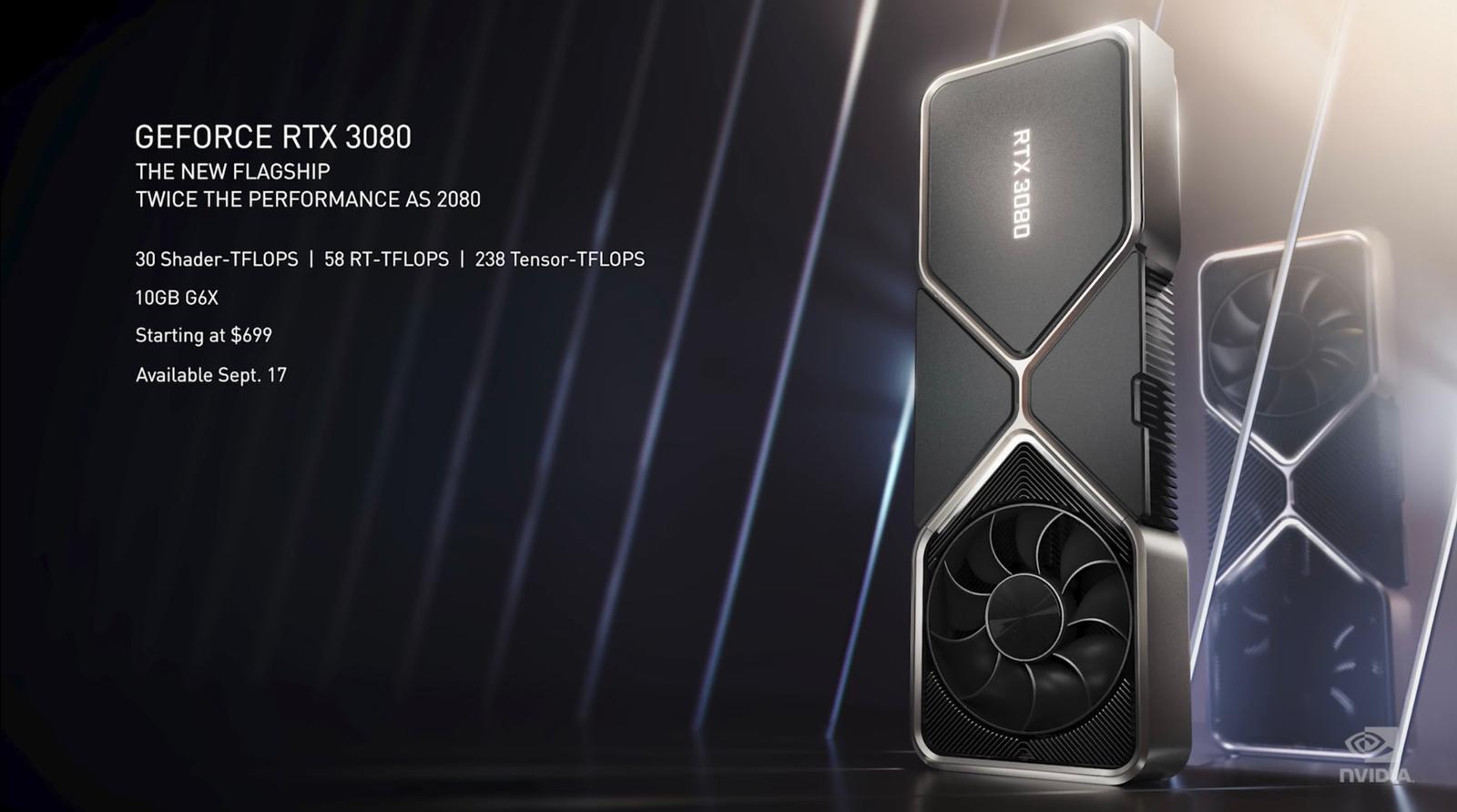 To cater to the rear flow-through fan, NVIDIA had to re-engineer the main circuit board to be far more compact, shrank the NVLink and re-positioned the power connector. In fact, all RTX 30 Series cards use a new 12-pin power connector, which NVIDIA claims allow for more space on the board for components and cooling. NVIDIA will also bundle an adapter that's compatible with current eight-pin cables with its Founders Edition cards. Third-party cards from partners like ASUS and Gigabyte may continue to use the existing eight-pin connector though.

How much for all of these powers? Starting price for the RTX 3080 Founders Edition is US$699 with availability starting from 17th September onwards. That's the same price as the RTX 2080 Super Founders Edition, but yet it's capable of delivering nearly twice its performance. So taking that into context, the RTX 3080 looks like a worthy upgrade to your existing RTX 20 Series cards. 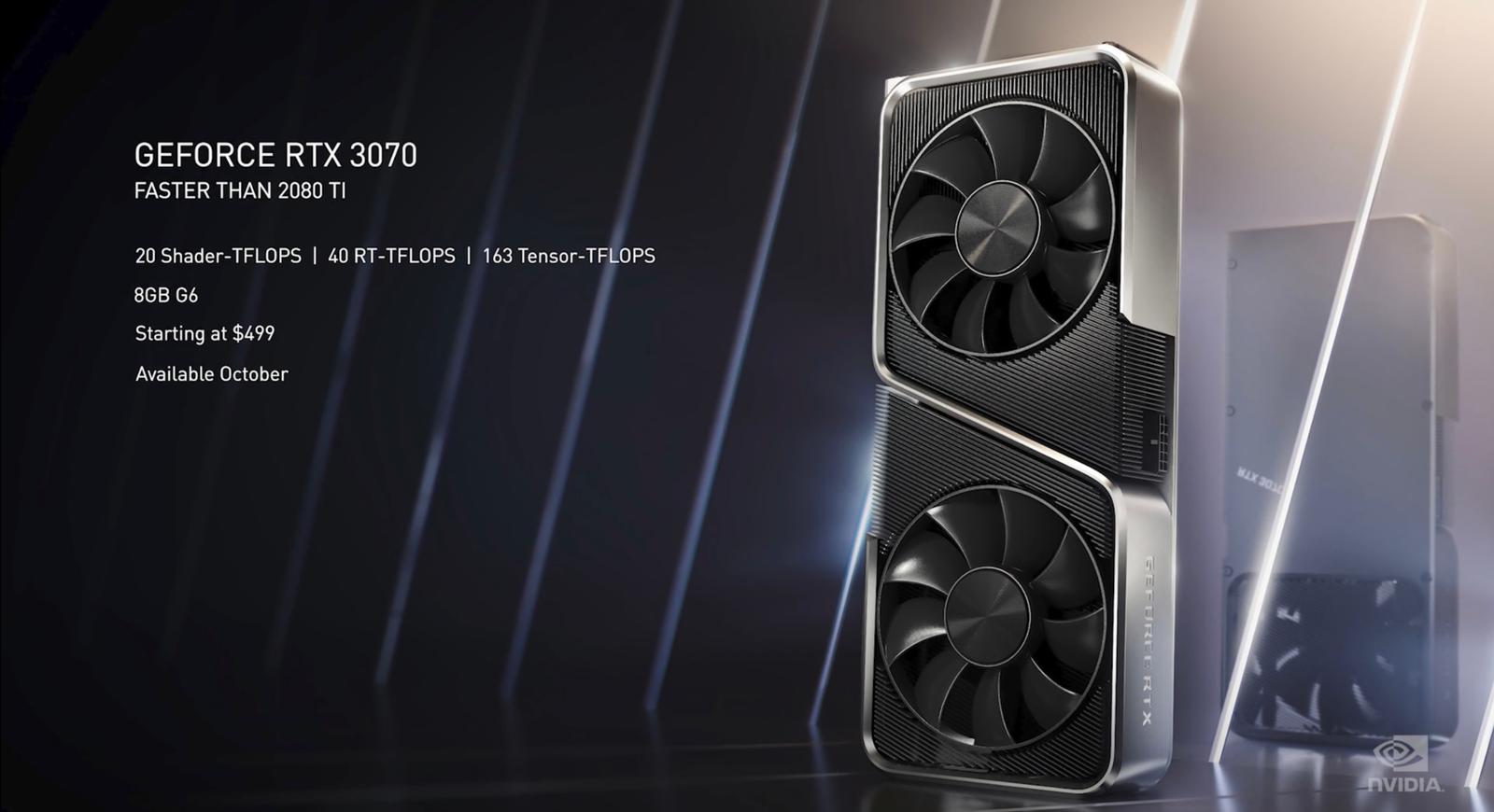 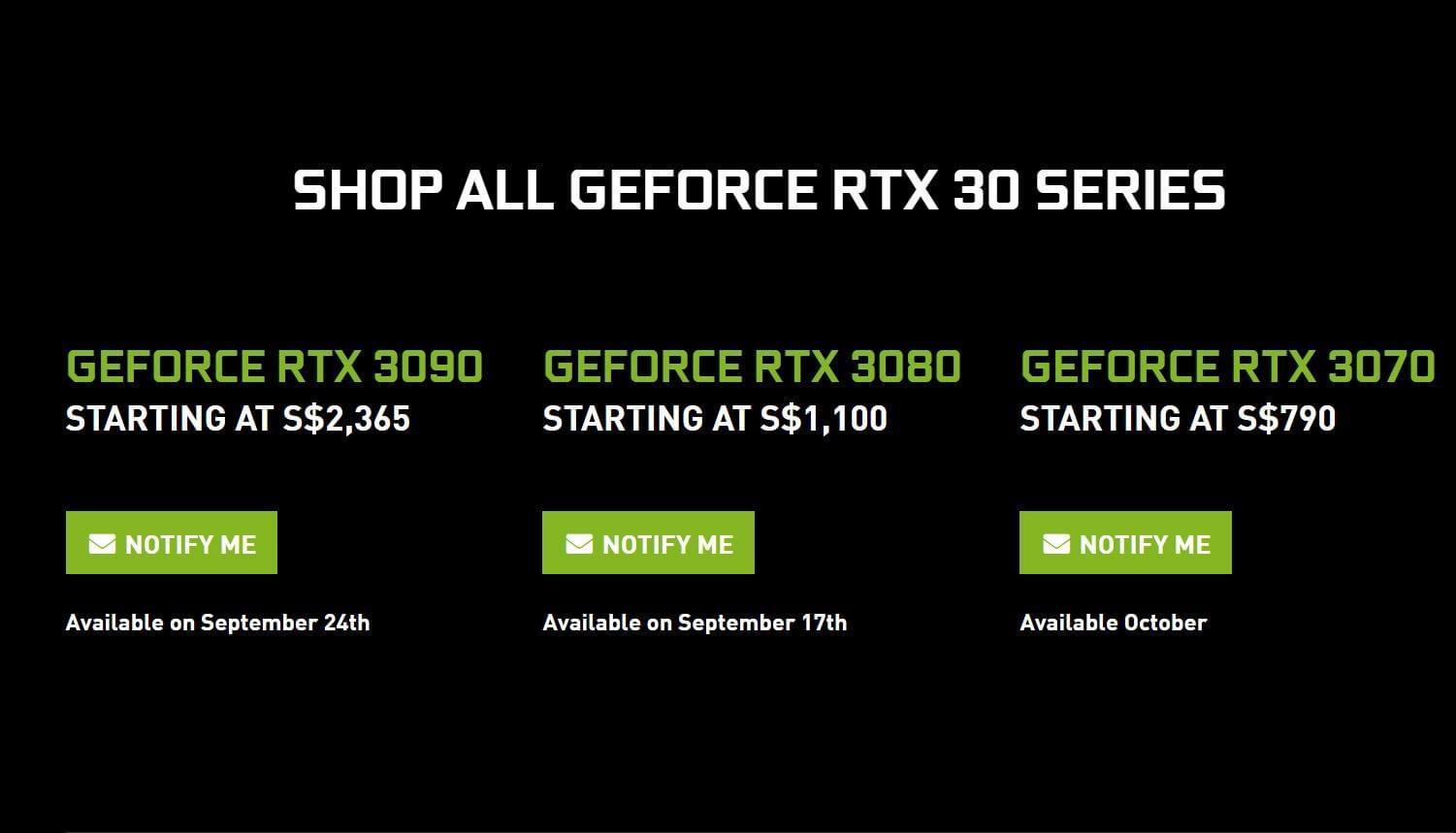 The RTX 3080 may be the designated flagship, but NVIDIA still has an ace up its sleeve with the top of the line RTX 3090. More akin to the Titan line of NVIDIA cards, it comes with a massive 24GB GDDR6X memory and designed for 8K gaming.

What makes the GeForce RTX 30 Series so powerful? 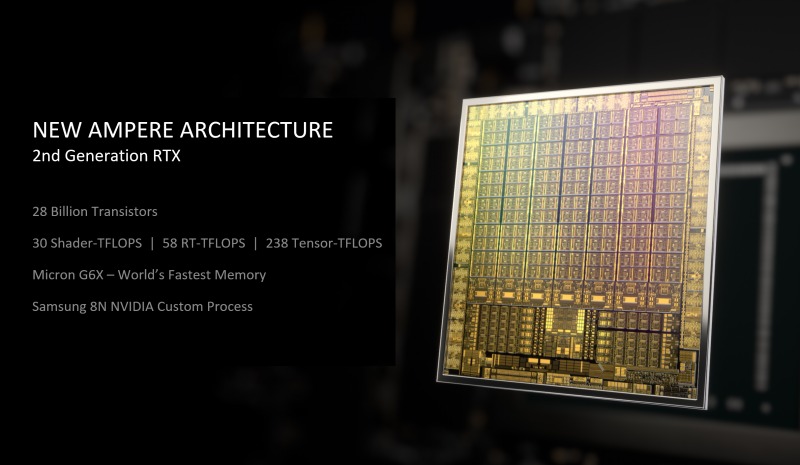 While the capabilities of a data centre GPU and a consumer/workstation part aren't usually worlds apart and draw a lot of similarities as we've established between Turing and Volta where both parts are based on the same manufacturing process and mostly contain the same structure and processing cores, the same can't be said for the Ampere architecture used on the A100 Tensor Core GPU and that of the new GeForce RTX 30 Series. Take a closer look at how RTX 30 Series' top card stacks up against the A100:-

NVIDIA hasn't revealed all the details and has reserved 17th September to shed more GPU details. Still, we've enough to get a good idea what's going and what contributes to the high performance of the GeForce RTX 30 series.

Firstly, the GeForce RTX 30 series GPUs use a very different design from the A100 and manufactured with a different process technology; look at the massively different CUDA core count and transistors packed. Despite the difference, they are still based on the Ampere architecture family and inherit some of the best traits like the third-gen Tensor Core engine which promise at least two times more tensor core performance or greater and this bodes well for AI computational needs. To draw references to consumer and gaming usage, NVIDIA DLSS (which first debuted in the RTX 20 series) is a big qualitative feature and performance booster for cranking out higher quality visuals by working with lower resolution images processed by deep learning neural network deployed in real-time that's powered by AI processing courtesy of the Tensor Cores.

The next performance enabler comes from using Micron's brand new GDDR6X memory that utilizes a new signal transmission technology with a four-level pulse amplitude modulation or also otherwise known as PAM4. First in the industry to employ this signalling scheme to make its GDDR6X memory a reality, PAM4's breakthrough is its ability to use four distinct levels to transmit two bits of data to and from memory as opposed to using only two signalling levels to send one bit per cycle. That means the PAM4 signalling technique has doubled the number of electrical states and thus doubled the data rates without having to double the operating frequency. As a net result of being able to push more data without having to increase frequencies, power consumption per bit sent goes down.

We'll share more details of the GPU when NVIDIA unlocks more information. Still, one thing is for sure - the GeForce RTX 30 Series will convince even recent adopters of the GeForce RTX 20 Series to consider upgrading.

Read Next (3): NVIDIA's Broadcast app makes it even easier to start streaming