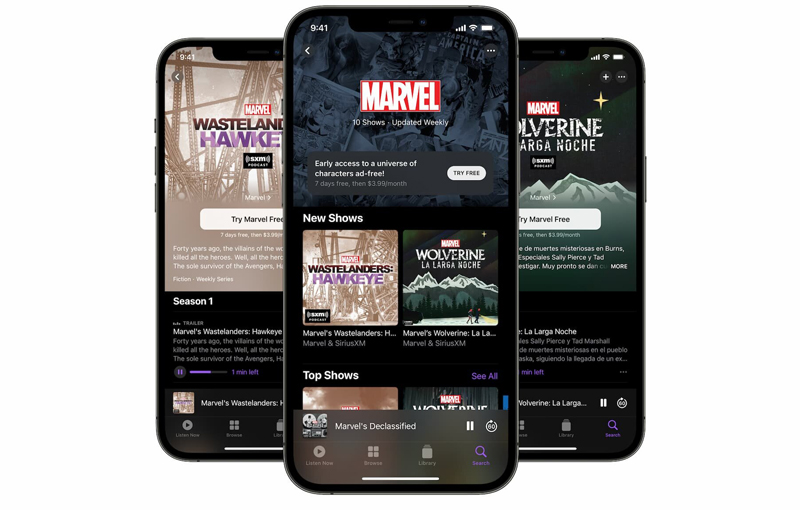 Superheroes on the go.

Apple Podcasts is introducing Marvel Podcasts Unlimited, a new paid subscription available exclusively on the service’s new Marvel channel. This subscription will cost you S$5.98 per month, but you can try it out for free with a seven-day trial period.

Marvel Podcasts Unlimited should be a tempting purchase for podcast listeners who double as Marvel fans, as subscribers get early and exclusive access to a growing collection of shows featuring very familiar characters. You’ll get to listen to fan-favourites like Star-Lord, Wolverine, Hawkeye, Black Widow and Doctor Doom in these scripted and unscripted podcast series.

On the unscripted side of things, there’s also Marvel/Method, a series which has actor-rapper Method Man interviewing celebrity guests about Marvel. This Week in Marvel is a weekly series about the latest in Marvel’s comics, TV shows, movies, games, toys and more. Other shows include Women of Marvel, Marvel’s Voices and Marvel’s Pull List.

Join HWZ's Telegram channel here and catch all the latest tech news!
Our articles may contain affiliate links. If you buy through these links, we may earn a small commission.
Previous Story
Google Pay users in Singapore can get cashback when paying to outlets using FavePay
Next Story
Love to read? Amazon just announced a new Kindle Paperwhite