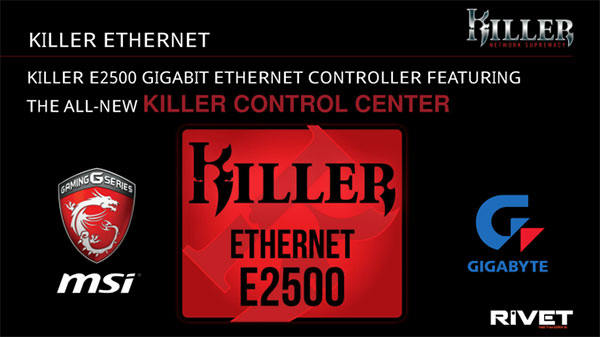 Rivet Networks has announced the successor to its current Killer E2400 NIC. The new Killer E2500 network controller will arrive by the year’s end on motherboards from Gigabyte and MSI, and feature improvements like better packet processing metrics thanks to a redesigned approach to network application detection.

Like the E2400 before it, the E2500 uses what Rivet Networks calls Advanced Stream Detect 2.0 for network connection detection and data packet analysis. However, it isn’t restricted to detecting programs, and can also detect up to 500 whitelisted websites across different browsers.

This means users can theoretically prioritize a YouTube video in one browser window over a download in a different window, while still keeping their game of choice at the highest priority. Power users will appreciate the feature, because it means they can do everything at once, whether it's loading a video, carrying out on-the-fly encoding and upload, or gaming.

On top of that, the E2500 can supposedly provide better prioritization, packet processing latency, and dispatch latency, all while utilizing less CPU time. There are a total of six levels of priority, and priority one is automatically given to real-time traffic like games. 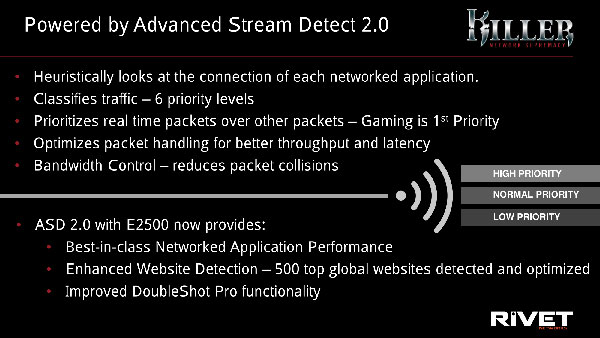 Rivet Networks also worked to simplify the software interface and make it easier to use. For instance, it’s now a lot easier to view application bandwidth consumption and block or limit a particular bandwidth hog in the Killer Control Center.

The first two products to use the Killer E2500 NIC are MSI’s upcoming Z170A Gaming M6 and its new Aegis Ti gaming PC. These will launch by the end of this year, alongside other Gigabyte motherboards.