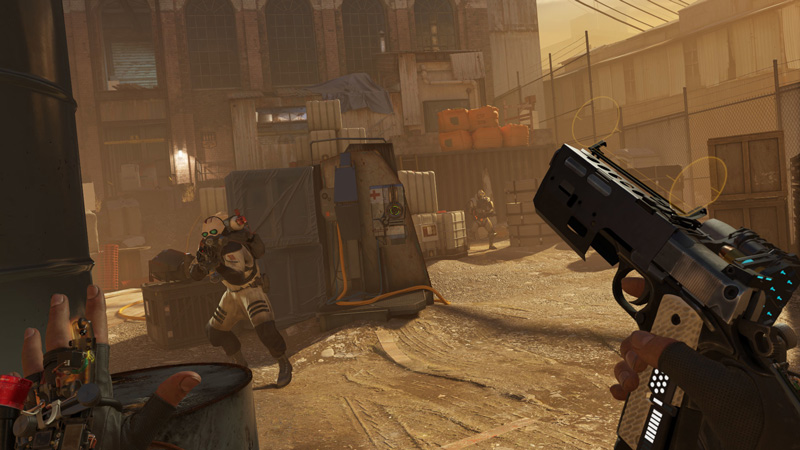 Several impressive new gameplay videos for Half-Life Alyx have been released, showing off what just might be the next big step in VR gaming.

In these clips from Valve’s Half-Life 2 prequel, you’ll see Alyx shooting up Combine soldiers, solving puzzles, healing up and interacting with the environment in ways only possible in virtual reality:

This game won’t just be a one-off virtual reality gimmick, either. Valve has confirmed that this is a fully-fledged videogame, with a runtime similar to Half-Life 2. The game looks visually spectacular, and even lets you choose between different movement styles for players wary of motion sickness. You can either teleport around levels, walk around like in a normal game or ‘shift’ to different places, which is a compromise between the two options.

The third video is probably the most impressive one out of the lot, showing off the game’s various mechanics coming together during a combat encounter with Combine soldiers. Alyx can pull open car doors to shield herself from enemy fire, use her gravity gloves to snatch ammo from afar, throw grenades back at enemies and move items around to find secrets.

Half-Life Alyx might turn out to be the most immersive and visually impressive VR game to come out in a while - but we’ll have to wait until March 23, 2020 to find out. The game will launch on Steam and will be playable using various virtual reality headsets.

Join HWZ's Telegram channel here and catch all the latest tech news!
Our articles may contain affiliate links. If you buy through these links, we may earn a small commission.
Previous Story
24 PUBG Mobile teams from Malaysia and Singapore will battle for US$150,000
Next Story
Coronavirus forces NVIDIA GTC 2020, Google I/O 2020 and more to cancel physical events