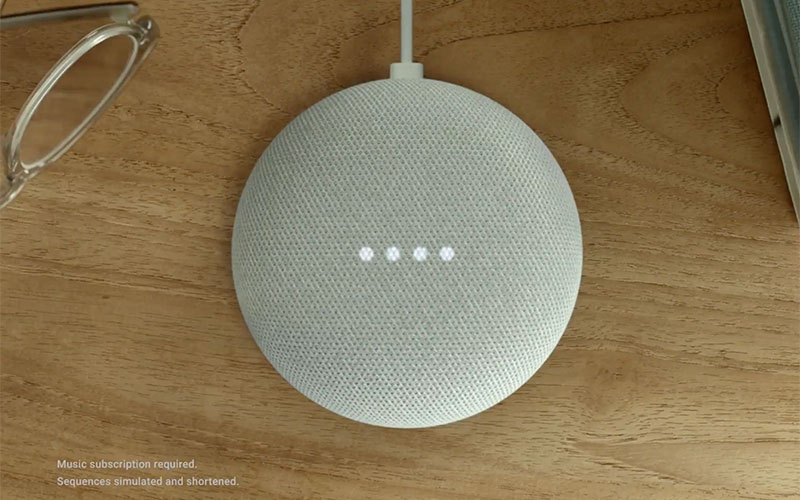 Google has just announced the Home Mini, a new, smaller version of their Home digital assistant and speaker device.

Google says the Home Mini is smaller than a doughnut (how big is the doughnut?) and was designed to fit into the home and to be placed anywhere.

Almost the entire Home Mini is covered with fabric, which is apparently a new material that Google made from scratch. It’s supposed to be durable and soft, but transparent enough for sound to pass through. The microphone has far-field voice recognition that should recognize you even at a distance. There are four LED lights under the Home Mini that light up to respond to your voice, and you can also control the Mini through touching the fabric.

The Home Mini can project 360-degree sound with a 40mm driver, and for beefier sound, it can connect to Chromecast speakers wirelessly. It supports Wi-Fi and Bluetooth connections.

The Home Mini will come in three colors, coral, chalk, and charcoal. It will retail at US$49, with pre-orders starting today and will ship on October 19th in all seven countries that Google Home is already available in. Singapore, unfortunately, is not one of them.

Join HWZ's Telegram channel here and catch all the latest tech news!
Our articles may contain affiliate links. If you buy through these links, we may earn a small commission.
Previous Story
The new Home Max is Google’s big smart speaker for maximum sound
Next Story
Woman reportedly charged S$448 by Apple Orchard Road after iOS11 update bricks her iPhone