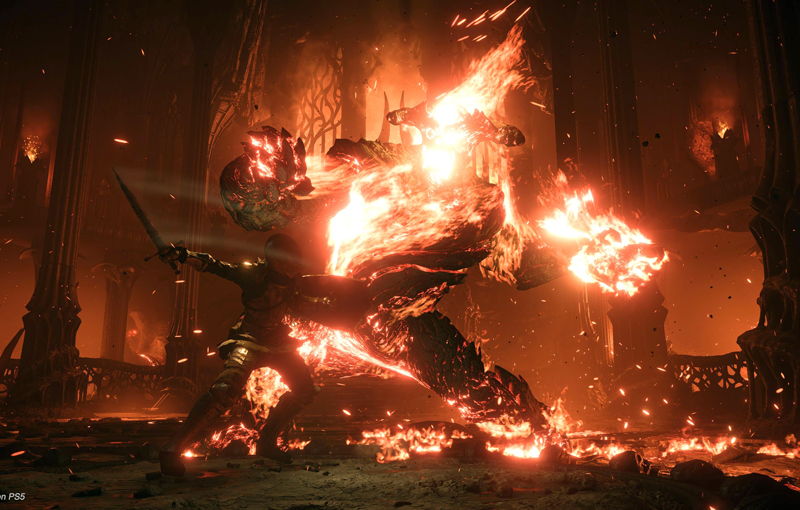 This might be the best-looking next-gen game we’ve seen yet.

PlayStation has released a new gameplay trailer for Demon’s Souls, showing off almost six minutes of the game running on the PlayStation 5. The trailer follows the Slayer of Demons as they encounter two horrifying boss battles, the latter of which kills them.

The player faces off against two of the game’s remade bosses in this trailer: the Armored Spider and the Flamelurker. Both of these bosses just so happen to have fire-themed attacks, which double as a showcase of the game’s incredible illumination and particle effects. The trailer also explores Stonefang, one of the game’s five realms located in the deep underground.

In these tight tunnels and molten caverns, even the environment is your enemy. You will need to adapt to the situation, understanding when to press your attack at close-quarters and when to punish your enemy from afar. Even so, skill and reactions have their limits, and proper equipment and preparation could be the difference between victory and defeat. And remember that whatever the outcome, every death has meaning and will make the eventual success all the sweeter on your journey to become the Slayer of Demons.

I’ve got to say - this is definitely the most impressive next-gen game I’ve seen from both Sony and Microsoft so far. Interviews with the developers at Bluepoint Games have also begun to surface online, confirming that the game will be playable at 60fps and dynamic 4K resolution in a ‘Performance Mode’. It will also have almost-instant loading times.

Join HWZ's Telegram channel here and catch all the latest tech news!
Our articles may contain affiliate links. If you buy through these links, we may earn a small commission.
Previous Story
Japanese game company Drecom is working on a new Wizardry title
Next Story
Secretlab is going ALL/OUT with its latest LoL collaborative chair set