New Chromebook and Chromebox from Google and Samsung

New Chromebook and Chromebox from Google and Samsung 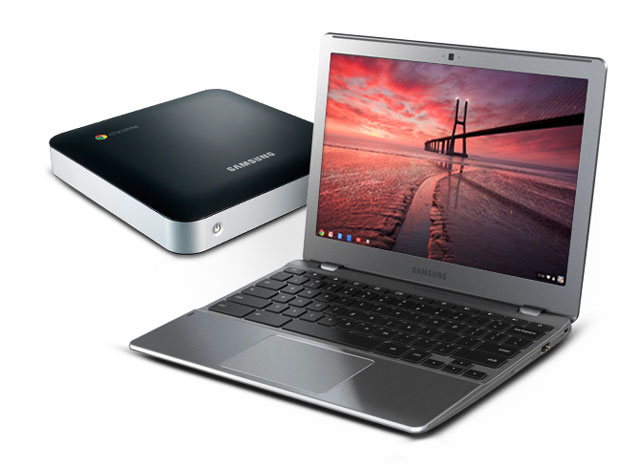 Google and Samsung have revealed a new series of next-generation Chrome OS products, although they are not likely to make their way to Singapore. Instead of a single notebook such as the Series 5 Chromebook, Google and Samsung have added the Chromebox to their line-up as well. Both of these machines have similar internal components, like a dual-core Intel Celeron processor and 4GB of RAM, but the Chromebox will serve as a desktop PC while the Chromebook will serve as a portable PC.

Like the previous iteration of Chrome OS, the new machines will still be heavily reliant on having a stable Internet connection. While the same old pros and cons will apply to these Chrome OS machines, they will also come with several new improvements which we have seen recently -- namely deep Google Drive integration, as well as the new desktop-like Aura interface.  There will also be some apps that work offline, but for now, apps such as Google Docs are still very much dependent on an Internet connection.

The Series 5 550 Chromebook reminds us of the Series 5 Ultra which we have reviewed recently, and it also comes with a decent number of ports with Wi-Fi and 3G support although no SD card reader is present. Meanwhile, the Chromebox comes with six USB 2.0 slots, a DVI port, and two DisplayPort++ outputs, compatible with HDMI, DVI and VGA.

Seeing how the previous Chromebook didn't reach our island, we don't really expect these Chrome OS machines to reach us either. However, the Chrome OS machines are increasingly becoming more adequate in schools and corporate environments that it might go mainstream sooner rather than later. And when they do, we might be able to see a Chromebook or two reach our sunny island shores.