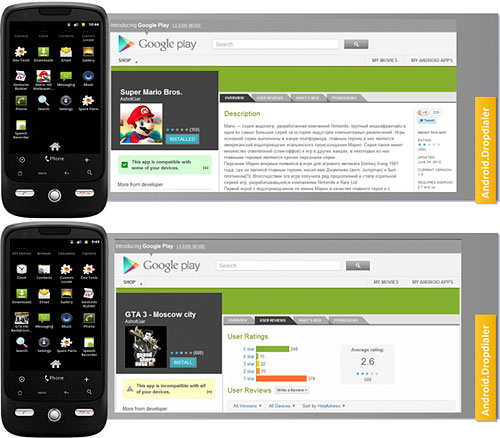 The Google Play app store has seen yet another malware. According to Symantec, this Android.Dropdialer Trojan was found masquerading as two popular game titles: Super Mario Bros. and GTA 3 - Moscow City. Since their appearances on Google Play on June 24, they’ve raked in 50,000 to 100,000 downloads.

Upon installation of the malicious app, it would proceed to download an ‘Activator.apk’ package that’s hosted on Dropbox. What happens next is this new package will send SMS messages to a premium-rate phone number. To hide its existence, it would even ask to uninstall itself after sending out the messages.

Google’s Android Security division has since pulled the apps from Google Play after it was alerted to the issue.

The lesson? Be careful of what you download, even if it's from an official channel.

Join HWZ's Telegram channel here and catch all the latest tech news!
Our articles may contain affiliate links. If you buy through these links, we may earn a small commission.
Previous Story
Digg Reportedly Sold for Just $500,000
Next Story
Successor of Samsung Galaxy Note to Sport 5.5-Inch Display and Narrower Body? (Update)