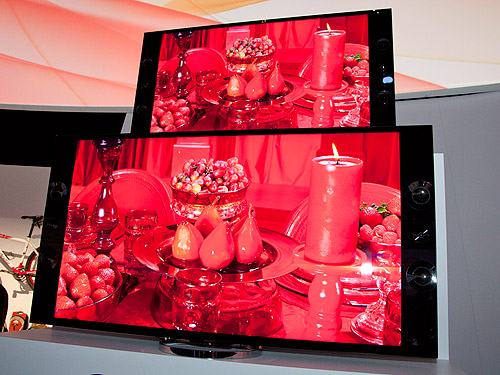 Earlier this evening, the President and CEO of Sony Corporation, Kazuo Hirai, unveiled two new 4K Ultra HD TV models at smaller screen sizes to complement the flagship 84-inch which was launched in September last year. The introduction of these new 4K Ultra HD TVs at 55- and 65-inches means that 4K Ultra HD TVs will be available at a more affordable price range - estimated to be around that of premium HD TVs.

Along with the enhanced picture quality, these X series 4K TVs also promise to offer a better sound experience via Sony's own magnetic fluid speakers. Through their unique DSP technology, Sony claims that these TVs will deliver midrange that's smoother and bass that's deeper with lower vibration. These TVs will also be Wi-Fi enabled and featuring NFC enabled remote that can be used with compatible mobile devices for screen mirroring.

Besides new 4K LED TVs, Sony also demonstrated the world's largest 4K OLED Ultra HD TV at 56-inches. Although not quite ready for mass production, Sony's public demonstration shows how far they've gone with OLED. The prototype demonstrated during the press conference was jointly developed with Taiwanese company AU Optronics. Unfortunately, the lack of any other OLED announcements does mean that we won't be seeing any OLED-based TVs reaching the market any time soon. In fact, when we questioned Phil Molyneux, the President and COO at Sony Electronics, we were told that 4K will reach mass market sooner than OLED. 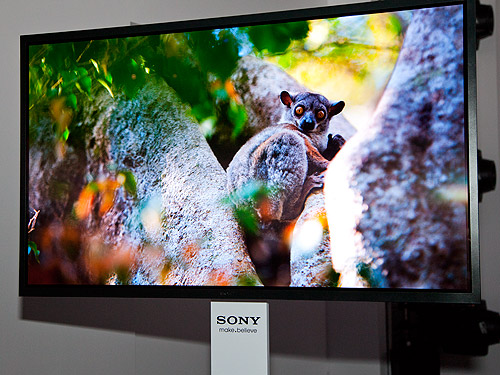 Apart from Sony's commitment in bringing their entertainment content (such as Total Recall 2012 and The Amazing Spider-Man) into the 4K format, Sony also has plans to introduce consumer 4K video camcorders into the market. At the press conference, Sony revealed the world's first consumer 4K video camera prototype, as a way to show their commitment in giving consumers the power to create their own content. Unfortunately, no timeline has been set for the introduction of such video camcorders into the market. 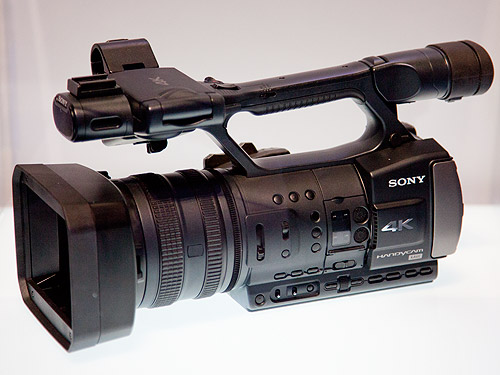 Apart from 4K LED TV models, Sony is also debuting two new series of LED TVs for consumers still looking for amazing full HD experience. These includes the W series of LED BRAVIA TVs (KDL-W904A, KDL-W804A and KDL-W674A) and the R series (KDL-R550A and KLV-R452A). All models in the W series as well as the R550A-series are Wi-Fi enabled while the W904A-series will come with premium features such as NFC, TRILUMINOS display, X-Reality Pro picture engine and active 3D capability.

The line-up of these new BRAVIA TVs will be available in all Sony stores and authorised outlets in the Asia Pacific from April 2013 onwards.

Join HWZ's Telegram channel here and catch all the latest tech news!
Our articles may contain affiliate links. If you buy through these links, we may earn a small commission.
Previous Story
Kingston Celebrates 10 years of HyperX at CES 2013
Next Story
ASUS Qube with Google TV Media Streamer Introduced