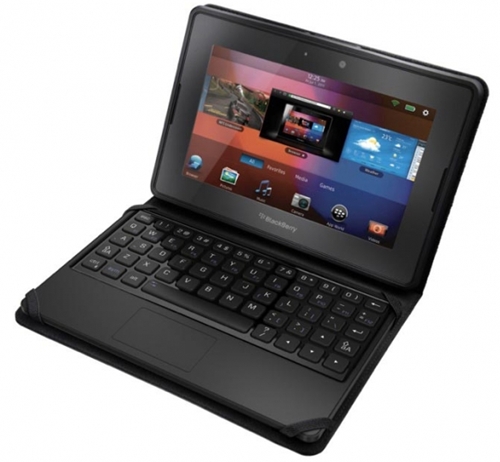 Now that the BlackBerry PlayBook has gotten the 2.0 treatment, the tablet finally has a larger selection of apps all thanks to its Android player and native email Now to further boost its usability, Research in Motion has announced the BlackBerry Mini Keyboard for those who prefer to have a physical option.

BGR - The accessory retails for a lofty $119.99 and is available for pre-order starting today, with shipments going out on March 23rd. The concept of the keyboard is similar to the competition. It includes a multitouch trackpad for browsing, a keyboard for easy input and a battery that last up to 30 days. Unlike the ASUS Transformer Prime, RIM’s accessory does not have a docking feature and is just a carrying case with an integrated Bluetooth keyboard.

Check out the lengthy video demonstration below:

Join HWZ's Telegram channel here and catch all the latest tech news!
Our articles may contain affiliate links. If you buy through these links, we may earn a small commission.
Previous Story
Symantec Warns That Dropbox and Facebook Links Could Be Spam
Next Story
Firefox 11 Hits the Streets