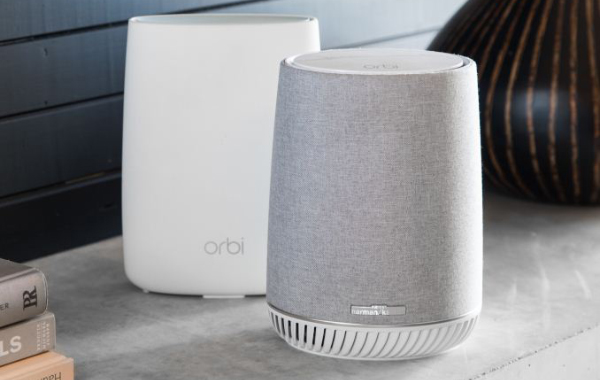 Netgear's Orbi lineup of mesh networking systems is one of the best in the business. In fact, its flagship RBK53 system was the winner of our Best Mesh Networking System award at Tech Awards 2018.

Now, there are expanding the lineup with the new Orbi Voice, a chic little unit that combines mesh networking capabilities with a smart speaker that supports Alexa.

In other words, Orbi Voice can play music, do smart home stuff, and expand Wi-Fi coverage all at the same time.

The speaker part of the unit was designed by Harmon Kardon and it features a single 1-inch tweeter and 3.5-inch woofer. The Orbi Voice can stream directly from Amazon Music, Spotify, Pandora, Deezer, and more. It also has four microphones for receiving voice commands.

On the networking front, users will be happy to know that it is a tri-band unit so it can dedicate one of its networks for backhaul communications. In our testing, we find that such systems with dedicated backhaul channels are typically faster.

Its single 2.4GHz network supports speeds of up to 400Mbps while its two 5GHz networks can handle up to 867Mbps each. In other words, it is an AC2200-class system.

The Orbi Voice will launch officially at SITEX 2018 and will be priced at S$799. It will be available exclusively through Challenger and Harvey Norman first.