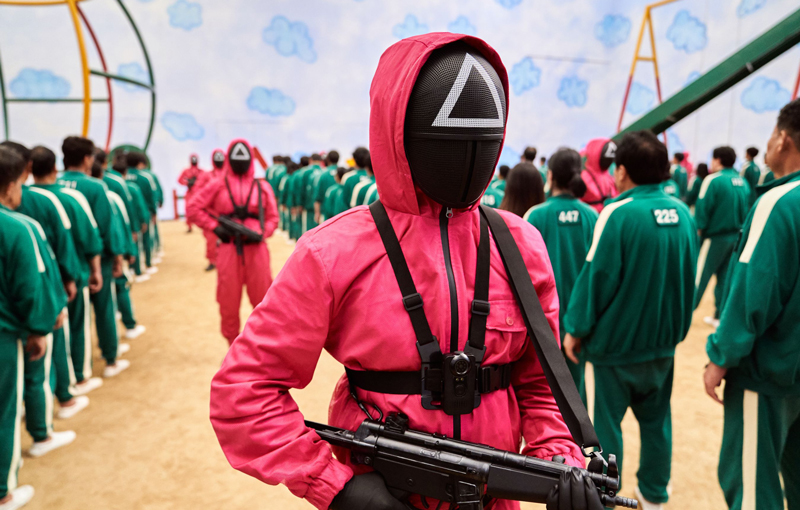 The writer and director of Netflix’s smash hit Korean drama Squid Game has an idea for Season 2, despite previously saying that he had no plans to continue the show. Here's a hint: it involves the police.

During an interview with The Times, series creator Hwang Dong-hyuk said that if he ever decided to make another season of Squid Game with Netflix, he would want it to explore, “the issue with police officers.” The story would involve a character from the show viewers already know: the Frontman. He said, “While I was writing season one, I thought about the stories that could be in season two if I get to do one - one would be the story of the Frontman.”

Spoilers for Squid Game ahead: the Frontman served as a manager of sorts, keeping a close eye on the games and their participants to ensure everything ran smoothly. He was later revealed to be a former police officer, who went so far as to shoot his brother to protect the games. Hwang Dong-hyuk notes:

I think the issue with police officers is not just an issue in Korea. I see it on the global news that the police force can be very late on acting on things - there are more victims or a situation gets worse because of them not acting fast enough. This was an issue that I wanted to raise. Maybe in season two I can talk about this more.

It looks like a potential Season 2 wouldn’t revolve around Gi-hun after all, who threw away his parental duties to find the people responsible for the games in the finale. When asked about a second season by Variety, Hwang Dong-hyuk had said: “I don’t have well developed plans for Squid Game 2. It is quite tiring just thinking about it,” but it looks like the writer has had a change of heart since. He also stressed that he would not write and direct the entire season by himself again, saying, “If I were to do it, I would certainly not do it alone. I’d consider using a writers’ room and would want multiple experienced directors.”

Squid Game has become a massive hit for Netflix, with its co-CEO Ted Sarandos recently saying: “Squid Game will definitely be our biggest non-English language show in the world, for sure, and there’s a very good chance it’s going to be our biggest show ever.” Netflix has no issue making sequels to successful projects, so it looks like the ball is in the court of Squid Game's creator for now.

Join HWZ's Telegram channel here and catch all the latest tech news!
Our articles may contain affiliate links. If you buy through these links, we may earn a small commission.
Previous Story
Samsung's Exynos 2200 to bring ray tracing to phones next year
Next Story
Amazon Games' New World has surged past 900k concurrent players on Steam