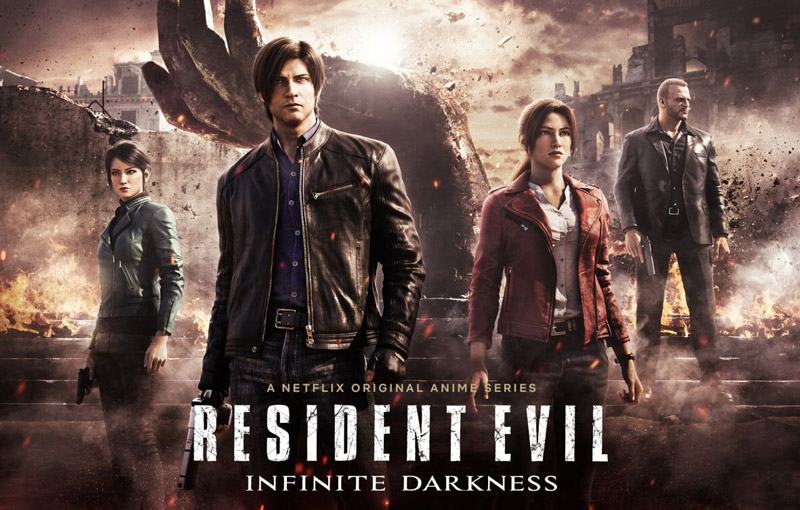 This franchise is on a roll.

Netflix have revealed a new trailer for their upcoming 3D-CG animated series Resident Evil: Infinite Darkness. We finally have a release date for the series, too: 8 July, 2021. The show will see Leon S. Kennedy and Claire Redfield reunite after the former’s Las Plagas-busting adventures in Resident Evil 4.

While previous trailers have kept the show’s story pretty vague, this gives us a better look at what Leon and Claire will face in Infinite Darkness. After the U.S. Army Mad Dogs encounter a dead special forces group moving in ‘strange ways’ during a war-torn encounter in Penamstan, a top secret White House file related to the incident resurfaces thanks to a hack.

Leon S. Kennedy and a new character named Jason investigate the file at the White House, but end up dealing with a horde of mysterious zombies instead. Meanwhile, Claire Redfield happens upon a conspiracy while providing support for refugees in Penamstan, related to terrifying experiments conducted in the region's past. The two Raccoon City survivors slowly stumble towards an unimaginable truth, and it somehow all comes down to what happened in Penamstan.

Nick Apostolides and Stephanie Panisello are set to reprise their roles as Leon S. Kennedy and Claire Redfield from the Resident Evil 2 remake too, so this series is full of fun little reunions. The animation is pretty interesting, too - it’s basically a full TV series made up of nigh-photorealistic videogame cutscenes, minus an actual game. Between this, the upcoming movie reboot and another live-action series on Netflix, Resident Evil fans are being treated to tons of adaptations this year!

Join HWZ's Telegram channel here and catch all the latest tech news!
Our articles may contain affiliate links. If you buy through these links, we may earn a small commission.
Previous Story
Microsoft confirms Windows 10X is dead, Windows 10 to get some features
Next Story
GTA 5 and GTA Online will hit PlayStation 5 and Xbox Series X|S in November