Well, this is finally happening. Netflix now allows you to download movies and TV series to watch offline on your phone, which is great news for those of you who wished you could take Netflix with you on your commute, but didn’t have a large enough data plan.

The streaming service announced in a blog post that Netflix members worldwide would be able to enjoy the new feature at no additional cost (regardless of your price plan), and the update is already available to download from the Apple App Store and Google Play Store. There’s just one caveat – not the entire library supports offline downloads yet, but Netflix says that it is working on adding more titles.

That said, there’s still a reasonable selection of titles available for download, including popular shows like Stranger Things, Arrow, Orange is the New Black and new releases like The Crown.

Downloadable content can be found in a new “Available for Download” section in the side menu, and is also marked by a new icon when you click on the show from within the regular library. 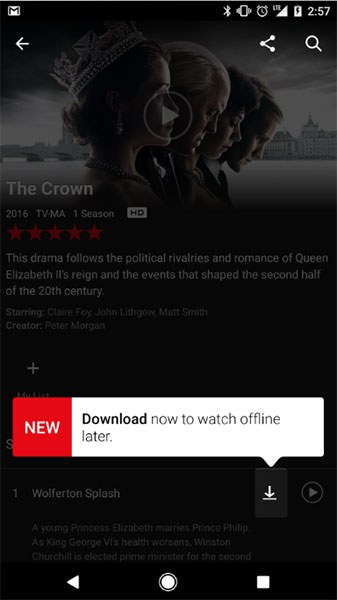 Downloads will live in the “My Downloads” tab, and you’ll be able to access them any time now, which means you can even take your favorite shows up to the plane with you.

There is also the option to choose between Standard and High video quality in the App Settings, with the latter obviously taking up more space and requiring longer to download.

This move by Netflix represents quite a stark reversal for the company. It has previously said that it would be unlikely to implement offline playback, but it looks like the company has come around to the realization that it could be a huge boon in countries with patchy internet connections. Furthermore, the feature will also help Netflix remain competitive in a space already occupied by the likes Amazon Video and on a more local scale, HOOQ.

Join HWZ's Telegram channel here and catch all the latest tech news!
Our articles may contain affiliate links. If you buy through these links, we may earn a small commission.
Previous Story
HSBC credit card holders can now use Apple Pay
Next Story
Klipsch introduces new Reference On-Ear II headphones