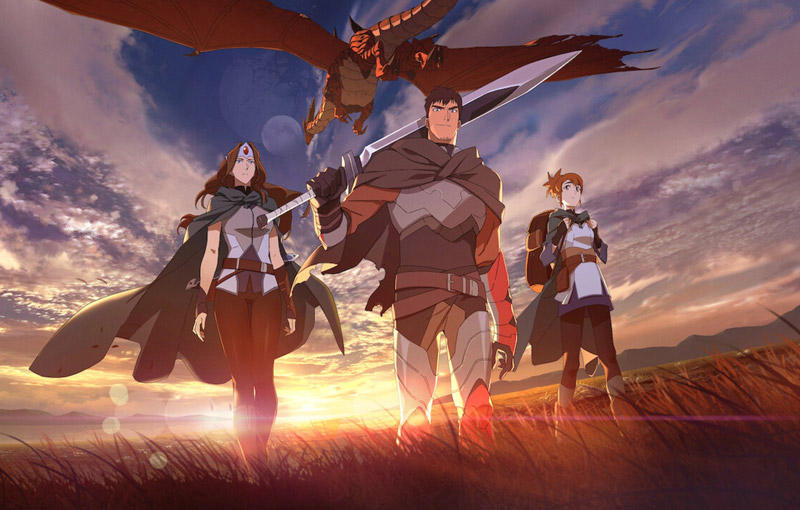 Netflix has just released the main trailer for DOTA: Dragon’s Blood, and it shows off a lot more footage from the upcoming series. Dragon’s Blood is an anime series based on Valve’s DOTA game franchise, consisting of eight episodes and animated by Studio Mir (the Legend of Korra, Voltron: Legendary Defender).

Here’s Netflix’s synopsis for the show:

The upcoming fantasy series tells the story of Davion, a renowned Dragon Knight devoted to wiping the scourge from the face of the world. Following encounters with a powerful, ancient eldwurm as well as the noble Princess Mirana on a secret mission of her own, Davion becomes embroiled in events much larger than he could have ever imagined.

It looks like the main plot of the series will involve our heroes chasing down some magical lotus flowers that might house Selemene, the goddess of the moon. The Dragon Knight Davion decides to escort Princess Mirana to get those lotus flowers back, but of course, their journey becomes far more dangerous than either of them could have predicted. We even get a tease that Selemene might not be all that she seems, with one character ominously saying about her: “The brightest lights cast the darkest shadows.”

We don’t see a ton of heroes from DOTA 2 appearing in this trailer, but there’s always room for more cameos down the line. If Dragon’s Blood proves successful, who knows? Valve might just start investing in multiple TV shows based on their hit MOBA.

Join HWZ's Telegram channel here and catch all the latest tech news!
Our articles may contain affiliate links. If you buy through these links, we may earn a small commission.
Previous Story
Pokemon Brilliant Diamond and Shining Pearl will arrive for Nintendo Switch in late 2021
Next Story
Leaks of Realme X9 Pro showcase MediaTek chipset, 108MP cameras, and alleged renders