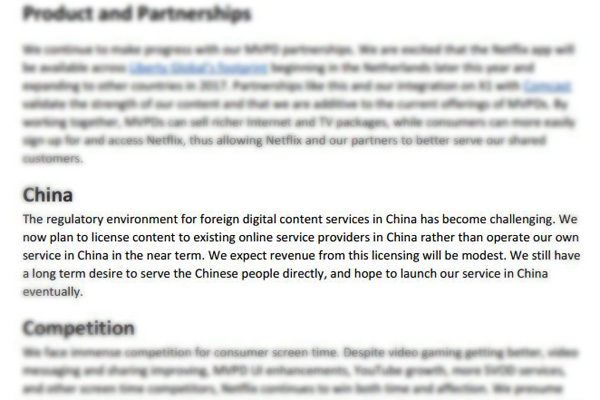 In a recent letter to shareholders published alongside its third-quarter earnings report, Netflix reveals that “The regulatory environment for foreign digital content services in China has become challenging.” As a result of making no headway in the country, Netflix will now “plan to license content to existing online service providers in China rather than operate our own service in China in the near term.”

With the bold ambition of moving into countries over the world, it’s no surprise that Netflix would like to add China to its growing portfolio of some 190 markets. But China has shut down offerings from the likes of Disney and Apple before, and has notoriously strict regulations regarding foreign digital services and media.

Netflix would likely have to spend years building up a custom library of content specifically censored to fit Chinese regulatory requirements. Thus, the strategy for now seems to be to just license content from existing online service providers in China while they navigate the terms for operating in China.

Still, Netflix CEO Reed Hastings admitted at the New Yorker TechFest earlier this month that things didn’t look good as far as China went. He says: “We’re figuring our way out (in China), but we’re really focused on the rest of the world. There is so much opportunity for us in India, Poland, Turkey and Latin America and Vietnam.”

Netflix launched in 130 countries simultaneously back in January, leaving only North Korea, Syria, and China as unchartered territories. Perhaps sometime in the near future?

Join HWZ's Telegram channel here and catch all the latest tech news!
Our articles may contain affiliate links. If you buy through these links, we may earn a small commission.
Previous Story
Sharp Mobile returns to Singapore with two mid-range smartphones
Next Story
Acronis Storage is the first to offer blockchain data authentication in a software-defined storage product