MyRepublic's Teleport service is now free for all its broadband subscribers

MyRepublic's Teleport service is now free for all its broadband subscribers

MyRepublic has just sent its customers an email to notify that its Teleport service will no longer be a chargeable add-on. Starting from this month, it will be re-focused to be a key feature for MyRepublic's broadband service. Considering the increased competition in the high speed fiber broadband arena, we feel that it's a good move by by MyRepublic to further differentiate its offerings and offer even more value.

According to MyRepublic, this is not tied to any particular fiber broadband plan, but it applies to all plans offered by MyRepublic.

Previously, MyRepublic had offered all its fiber broadband subscribers free access to Teleport, but it was only applicable to those who have signed up before May this year and the offer was supposed to end on June 30. Since then, MyRepublic had extended the free promo period until August 30, beyond which existing subscribers who hadn't opted out of the service was offered a Teleport subscription at a promotional rate of S$1.88/month (Teleport’s usual price is S$5/month) for the next 12 months.

For those unaware of the Teleport service, it is a network routing technology by local fiber broadband service provider MyRepublic. Unlike a traditional VPN, it’s built into MyRepublic’s network, so there’s no complicated settings to configure and you don’t get slowed down unnecessarily when you aren’t streaming overseas content, say from Netflix, ITV, BBC, or TVB. 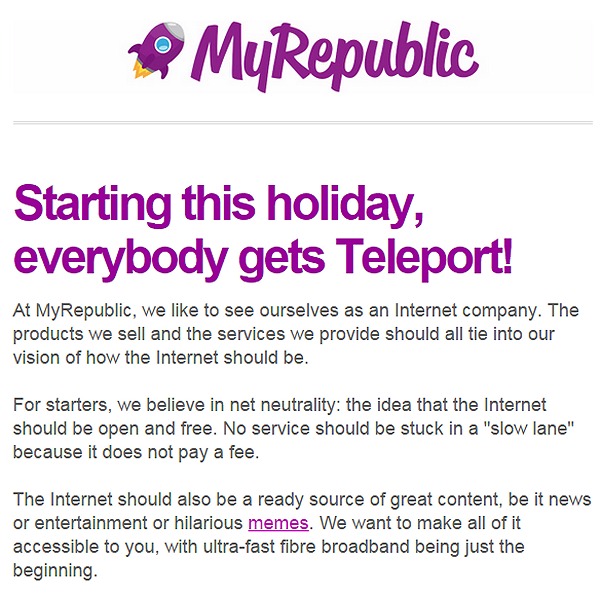 Previous Story
Photos of alleged Xiaomi's Mi Pad 2 leaked, rumored to run on Intel processor
Next Story
OnePlus also has a 10,000mAh power bank, and it costs US$15