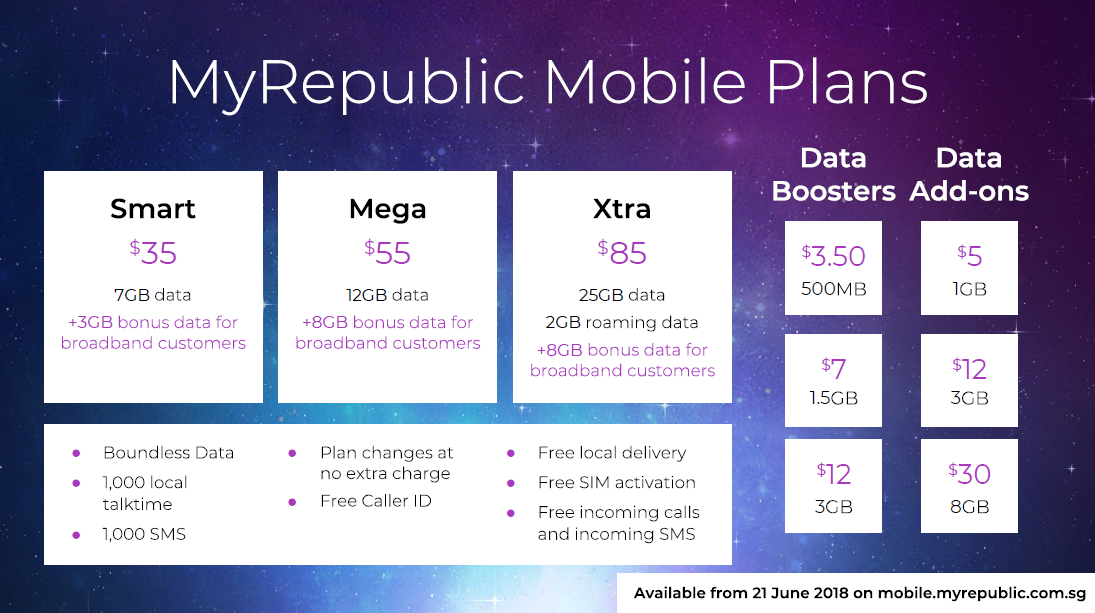 All plans include "Boundless Data", which just means that MyRepublic will never charge excess data charges. However, while users who exceed their official monthly data limit will still be able to connect to the Internet, speeds will be throttled to between 384Kbps to 1.2Mbps. MyRepublic says these speeds are enough to browse the internet or send Whatsapp messages, but not enough to stream videos in HD.

Customers who wish to purchase more data can do so via either one time only 'Data Boosters' or monthly recurring 'Data Add-ons':-

Customers will be able to amend their plan at any time without any charges through the MyRepublic mobile app.

MyRepublic also announced its Roaming Data Boosters that will let you use data overseas: Take note that the Xtra 85 plan actually comes with 2GB worth of Essential Roaming Data Booster valued at $18.

MyRepublic also announced that it plans to launch more mobile plans in the coming months, and will soon start selling devices along with its plans.

Read Next: The best SIM-only no-contract plans in Singapore!

Join HWZ's Telegram channel here and catch all the latest tech news!
Our articles may contain affiliate links. If you buy through these links, we may earn a small commission.
Previous Story
Instagram’s standalone IGTV app will let content creators upload 1-hour videos
Next Story
The HP Sprocket Plus portable printer lets you print your social media photos with ease