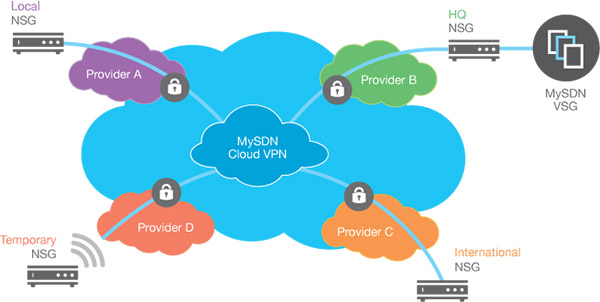 If you think about it, the static architecture of traditional networks is getting increasingly in conflict with today’s computing and networking trends. With things like people bringing their own devices to the workplaces, the popularity of cloud services, and big data that demands more bandwidth, modern network designs should aim to be easy to configure, quick to scale, and in terms of equipment, vendor independent.

MyRepublic, an Internet service provider in Singapore, Indonesia, New Zealand, and soon, Australia, and one that aims to be Singapore’s fourth telco, has just had its most enterprise-oriented press conference earlier today, where it officially launched its MySDN Cloud VPN solution.

A service built on Nuage Networks from Nokia’s Virtualized Network Services offering, MySDN Cloud VPN uses the latest in SDN (which stands for software-defined networking) tech. In a nutshell, through software, your network infrastructure is ‘virtualized’. And through an online interface, you’re able to centrally control your distributed network, and make changes instantly, including provisioning of new sites. MySDN Cloud VPN’s “carrier-grade” provisioning and policy engine is hosted by MyRepublic, and the service supports IPSec and features dual WAN port uplinks per device for added redundancy.

Here’s an example. Say you need to provision and setup a new branch office in another country. The traditional WAN way of doing things is you need people on-site for the provisioning. With MySDN Cloud VPN, you can do so via the portal without leaving the HQ, courier the NSG (network services gateway) device to the overseas branch, and get someone there to plug it into an Internet connection and activate it. After which, your new site will be up and running, hooked up to the rest of your secure network. Streamlining on-premise hardware and minimizing truck roll (that’s geek speak for the need to dispatch an engineer or a technician to do something) are some of the obvious advantages of an SDN implemention.

MySDN Cloud VPN is now available to customers across the region, including Singapore, Indonesia, and New Zealand. The company has partnered with established regional IT solutions partner ACA Pacific Technology for support and after-sales care.

Previous Story
Is the eero the Wi-Fi router you’ve been waiting for?
Next Story
More Nikon D750s affected by shutter fault than previously thought