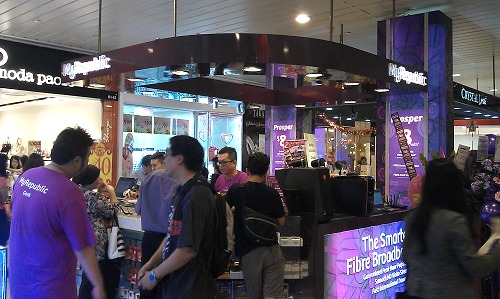 MyRepublic is celebrating its opening of its first Singapore store today - the first in MyRepublic's planned chain of retail outlets that will focus on promoting and showcasing the experience of Next Generation high-speed fibre broadband and its applications. Wired up to Singapore’s all-fibre Next Generation National Broadband Network (Next Gen NBN) infrastructure, this new MyRepublic store will offer free public access to several computers connected to MyRepublic’s fibre broadband.

Located in the Basement One of Ang Mo Kio Hub, the store marks a first step towards MyRepublic’s goal of achieving a greater public appreciation and understanding of optical fibre-powered internet access and the rich online multimedia uses it allows. Towards this end, several of the computers on-site have been installed with popular video games, like CounterStrike Global Offensive, and recommended video streaming websites have been bookmarked for easy reference.

Part of the premium experience MyRepublic looks to demonstrate lies with the start-up’s one-of-a-kind network data prioritization system, which identifies and manages different types of traffic on the MyRepublic network. Time-sensitive applications, such as video streaming, gaming and VoIP, are assigned higher priorities to minimize video buffering and lag during busy network peak hours.

To celebrate the retail outlet’s grand opening, MyRepublic will be offering an exclusive in-store promotion of S$28 per month for a 12-month contract of 100Mbps fibre broadband, limited to the first 188 customers. A further promotion of S$38 per month for 12 months of 100Mbps fibre broadband will be available for every customer who signs up at the outlet until 8 February 2013. Those interested in signing up for MyRepublic's 150Mbps GAMER plan can enjoy either of these promotions by topping up S$10 a month.