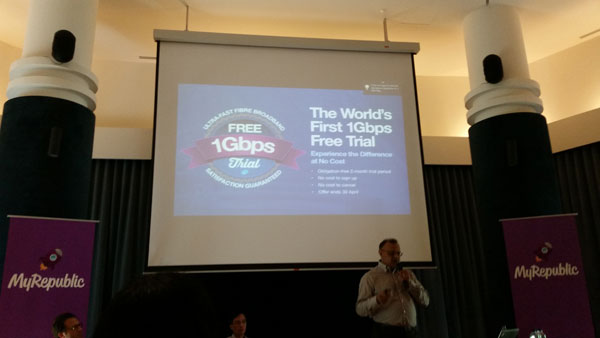 After rolling out its S$49.99 1Gbps fiber broadband “Ultra” plan a year ago, MyRepublic today announced the world’s first 1Gbps fiber broadband free trial due to begin on 19 March. The trial will be available until 30 April and will have no hidden costs associated with sign up or cancellation during the trial period.

CEO Malcolm Rodrigues offered some insight into the company’s move, saying, “It’s tempting to keep harping on speed but it’s really a matter of access and affordability.” MyRepublic believes that faster speeds are needed to cope with the increasing numbers of connected devices, rich, multimedia streaming, and the demand for always-on connectivity and its free trial aims to further lower the barriers to 1Gbps fiber broadband speeds.

The internet service provider has also announced that it is pursuing plans to become Singapore’s fourth telecommunications provider. The company is currently in talks with the Infocomm Development Authority of Singapore (IDA) on how best to facilitate a new fourth telco and will be bidding in the next 4G spectrum auction.

Moving forward, MyRepublic intends to build its mobile network based on small cells – effectively small boxes that can broadcast cellular radio frequencies and be installed in buildings – and complement them with Wi-Fi hotspots to improve coverage and speeds.

If all goes as planned and a fourth telco emerges onto the scene, consumers can look forward to benefiting from better services and lower prices resulting from the greater competition by 2017.