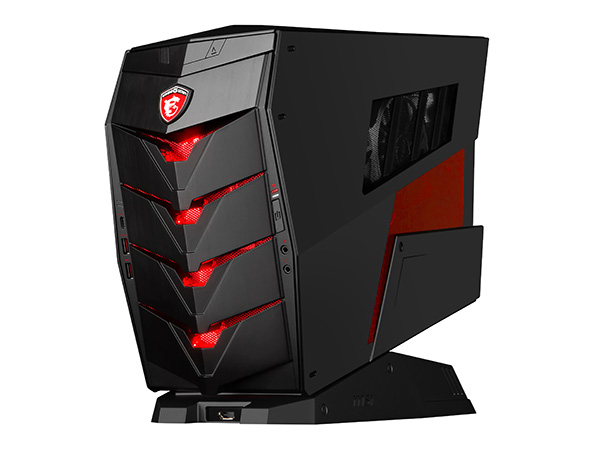 MSI picked the name Aegis for its latest gaming desktop PC as a symbol of its performance and product design. Known in greek mythology as a shield wielded by Zeus (the king of all gods) and Athena, the Aegis, like the new MSI gaming desktop, will be able to withstand all forms abuse you throw at it. Although greek mythology describes the Aegis as a weapon with "a hundred tassels of pure gold hang fluttering from it", the design of the new MSI Aegis X is far from its original description. MSI's modern interpretation of the Aegis looks more like the Destroyer from the movie Thor than gold tassels.

Making its debut at Computex Taipei this year, the new Aegis X is built with all the components you'll find in a regular desktop PC but in a much smaller form factor. With a height of only 376.1mm, the Aegis X is at least 40% shorter than most regular full tower casings. The width measures 169.92mm while its depth at 433.19mm makes the overall build of the desktop look smaller and more space saving than most others you'll find in the market.

On the front panel of the PC, you'll find what they call the Mystic Light, an array of LED colored lights giving the chassis a glow that will match any of those fancy Razer Chroma products you might already have in your gaming arsenal. With controls that lets you choose up to 16 million colors, you can set the mood of your PC with a click of a mouse button. Besides that, the lighting can also be configured to run on different modes, such as breathe, gradient and gaming/music. With all that light show going on, the MSI Aegis X is probably not the kind of desktop PC you want to hide under your table. 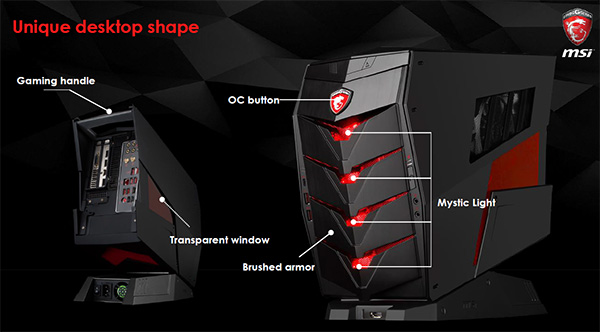 Apart from all the glimmering LED lights on the front panel, you'll find the familiar MSI Gaming G Series logo sitting right above. It's no ordinary logo though as it's actually a one click overclock button. Like the turbo button found on Intel 486 PCs of yesteryear, this button will boost the clock speed of the 6th generation Intel Core i7 K-series processor for added speed and performance. No reboots or complicated software tweaks necessary as this hardware overclock button is available on-demand, even while you're in the middle of a game. According to MSI, the overclock button can grant you an instant performance boost of up to 15% more rendering speed in Cinebench R15.

MSI has put a lot of emphasis on accessibility to frequently used ports in the new Aegis X gaming PC. Apart from the regular microphone input and headphone output jacks, you'll also find two USB 3.1 Gen 1 Type A ports for your regular USB devices and a new USB 3.1 Gen 2 Type C port for newer high speed devices that utilize the reversible design of the Type C connectors. Right at the bottom of the front panel, you'll find a HDMI port built specifically for future VR devices. 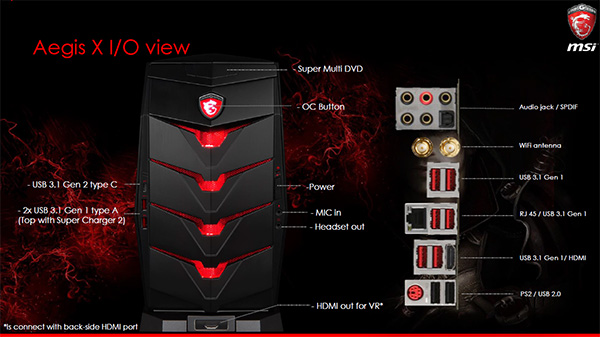 The new MSI Aegis X gaming desktop is powered by a MSI GeFore GTX 1080 8GB GDDR5X discrete graphics card, with the option for self upgrade should the graphics card runs out of processing horsepower in the future. The system is also designed to enable the easy replacement or upgrade of critical components such as your RAM (2x DDR4 2133MHz micro-DIMM slots up to 32GB), NVMe M.2 SSD PCIe Gen3 x4 (two slots and can be configured to RAID), hard disk drives (one 2.5-inch and two 3.5-inch bays) as well as your graphics card. Due to the size of the chassis, there's only enough space for one graphics card, so if you're thinking of an SLI configuration, it's basically not going to happen. For enthusiasts with extra cash to spend, the Aegis X can also be equipped with an advanced dragon liquid cooling system for those into extreme CPU overclocking. 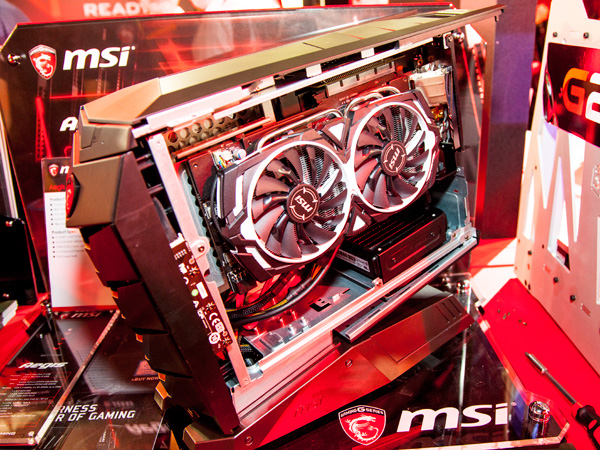 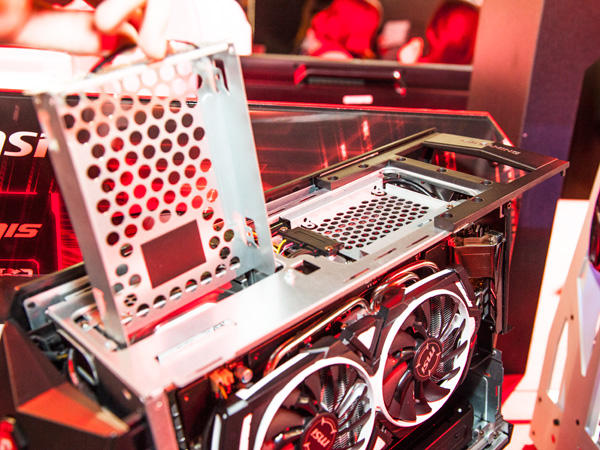 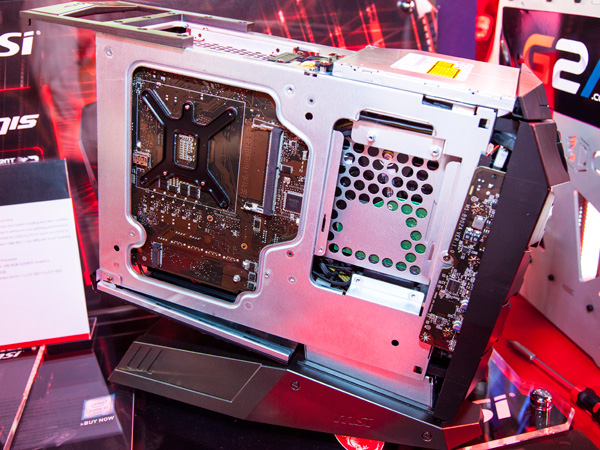 Other notable features include the Killer Shield protection that protects the network port from power surges of up to 15KV. On top of that, the Aegis X also comes with both Gigabit Ethernet wired connectivity as well as a Wi-Fi adapter. Through its Killer DoubleShot Pro network traffic manager, you can prioritize your network traffic to use both connection for maximum throughput of up to 1.867Gbps. The software will also allow you to set the wired connection to take a more reliable wired connection for your online games while other non-critical applications like web browsing, bit-torrent and Windows update can utilize the wireless connection. This might sound like a superb idea but practically, it only makes sense if you have two separate connections to the internet. If both your wired and wireless connection originates from one single router, they will ultimately bottleneck at the source even if the PC is optimizing its network using two different connection.

Expect to see the new MSI Aegis X in the second half of this year at your friendly MSI retailer and do check back here for more information on its performance and pricing.

Previous Story
The ASUS ROG Avalon prototype will make you rethink how DIY PCs are done
Next Story
The ASUS ZenFone 3 and ZenFone 3 Ultra are officially unveiled
Loading...
Featured Highlights