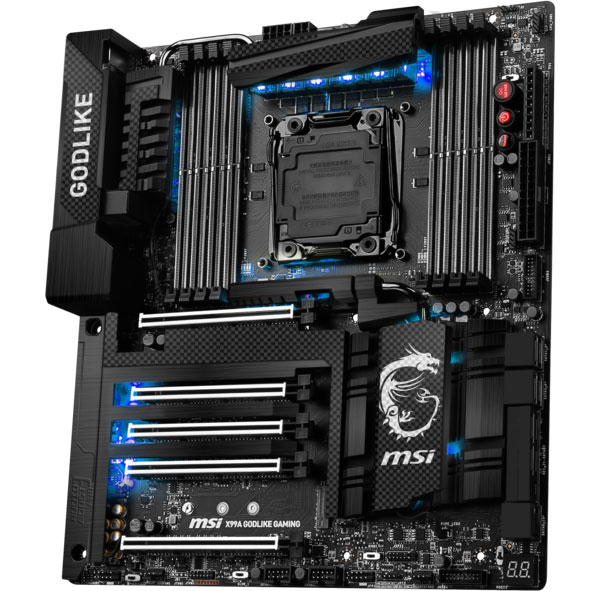 MSI has just announced two new special edition motherboards for the Intel X99 and Z170 platforms, and it looks like stealth is the name of the day. Each of the new boards sports striking carbon fiber designs and an all-black color scheme. If you’re looking to build a black-themed rig, these boards will definitely catch your eye.

The X99 board is actually a special Carbon edition of the extravagant X99A Godlike Gaming board that MSI announced earlier last year. It looks like the X99A Godlike Gaming Carbon, as it is called, is just the same board in a more stealthy outfit. It features MSI’s Mystic Light RGB LEDs, Audio Boost 3 Pro, and Killer DoubleShot-X3 Pro technology, and even utilizes extra pins in the CPU socket for reportedly better overclocking of Intel Extreme processors.

On the other hand, the Z170A Gaming Pro Carbon isn’t quite as striking as its X99 counterpart because it is missing an I/O cover, which disrupts the all-black look somewhat. Nevertheless, it is no slouch as it still features metal-reinforced PCIe slots, MSI’s Audio Boost 3, and an Intel Ethernet solution. And like the X99A Godlike Gaming Carbon, it is also equipped with Mystic Light RGB LEDs, which can be customized from up to 16.8 million colors and 16 LED effects. However, while the LEDs are located at the ends of the PCIe slots and below the VRM and PCH heatsinks for the X99 board, the Z170A Gaming Pro Carbon LEDs are positioned in a thick strip on the board’s right edge.

You can control the lighting on both boards via the MSI Gaming app on your PC, smartphone or tablet.

We don’t have further information on price or availability yet at this point in time, but we’ll update when we know more.

Join HWZ's Telegram channel here and catch all the latest tech news!
Our articles may contain affiliate links. If you buy through these links, we may earn a small commission.
Previous Story
Nikon's first action camera, KeyMission 360 shoots 360-degree video in 4K
Next Story
Samsung's latest tablet is an Intel-powered 12-inch Windows 10 2-in-1!