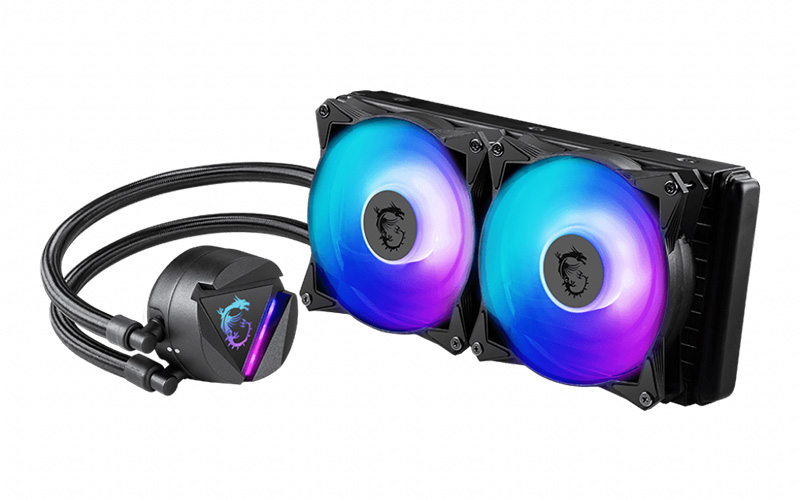 The dragon is framed by RGB strips that form a triangle, a distinctive angular aesthetic that gives the cooling block a more aggressive look. The blockhead can also be rotated by 270°, giving you more flexibility in terms of how to orient the pump when installing it.

According to MSI, the MAG CORELIQUID coolers have been designed with both performance and noise reduction in mind. The pump has been integrated into the radiator to dampen the sound – most AIO coolers still have their pump in the blockhead – a design decision that reportedly extends its life expectancy as well by moving it farther away from the CPU and the heat it puts out.

The pump itself utilises a three-phase motor, which MSI says generates minimal vibrations for longer lasting operation. Meanwhile, the radiator uses a split pathway design, which is supposed to help whisk heat away quicker. The cold water channels sit in the center, allowing for the use of dual hot water channels at the sides, which increases the area available for heat dissipation.

The MAG CORELIQUID will support all the major Intel and AMD CPU sockets, including LGA1156, LGA1200, AM4, and more.

Here's an overview of the local pricing:

Join HWZ's Telegram channel here and catch all the latest tech news!
Our articles may contain affiliate links. If you buy through these links, we may earn a small commission.
Previous Story
Gigabyte just made a bunch of high-wattage, compact power supplies
Next Story
Here's how you can turn on your Mac's startup chime