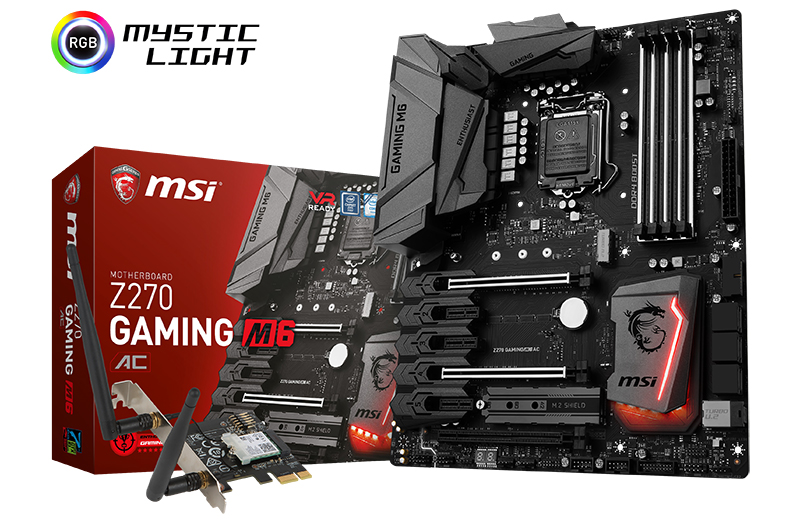 MSI has announced a new Intel Z270 motherboard in its Enthusiast Gaming line-up, around a month after it introduced four new Arctic-branded boards. The Z270 Gaming M6 AC is an all-black motherboard with beefy heatsinks that look like they were inspired by a stealth bomber, and it boasts nice additions like a bundled Phanteks RGB LED strip to jazz up your rig.

The rest of its feature set is quite similar to what we’ve come to expect from MSI’s gaming motherboards. This includes things like DDR4 Boost for supposedly cleaner memory signals, an M.2 shield to protect the drive against heat from the GPU, and RGB Mystic Light.

A subtle illuminated line runs down the top of the PCH heatsink, and its underside is lit by LEDs as well. The included Phanteks RGB LED strip plugs into the Mystic Light extension pin header, and you’ll be able to sync the color and LED effect with the onboard lighting.

Wireless connectivity is provided by an Intel Dual Band Wireless-AC 2x2 Wi-Fi adapter, and you'll get a maximum throughput of 867Mbps via the PCIe add-in card.

It also comes with a so-called VR accelerator chip that MSI says can provide a more stable VR experience by ensuring a cleaner and stronger signal to a VR-optimized USB port on the back.

Finally, there is support for a wide range of storage configurations, in the form of six SATA 6Gbps ports, two M.2 sockets, and even a dedicated U.2 connector.

MSI hasn’t released any details on price and availability yet.